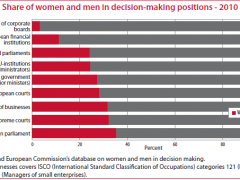 No doubt about it, the situation of women in society has improved dramatically. My great-grandmother, for instance, probably left her native village for the first time when she ran away from the forced marriage arranged for her. She emigrated to the States and after a while returned with quite a packet of money earned there. My grandmother was given secondary education (and by the way, was also one of the pioneers of skiing in Slovakia, an enthusiastic amateur on the hills surrounding her village, and an expert in avoiding the heaps of manure they were dotted with).

Nowadays it’s common for women to be part of the workforce, and various professions formerly reserved for men like teaching have now become their domain.  It’s also true, however, that women are still less employed and less well paid than men in the same positions. Surely this can’t be because they aren’t educated in general, since nowadays in Europe the majority of university graduates are women.

One part of the problem could be the fact that the people with real influence over employment and wage policies have always been men. And men form the majority not only in the business sector. The same goes for politics, where the majority of MPs are still men, even though a woman’s vote carries the same weight as a man’s.

Graph: EC Report on Progress on Equality between Women and Men in 2010, page 11

I’ve always argued that diversity is very useful in decision-making (see here or here). It’s important to work with someone who has a different point of view, someone who is not afraid to ask “Why” about apparently obvious issues.

That’s why I’m ready to accept those studies cited in EU papers that speak about the success of companies with women in managerial positions (page 56). The argument that women understand female customers better also seems obvious to me. Various companies have already implemented it.

But in line with the same logic of “increasing company performance”, what I don’t buy is that it’s useful to achieve the minimum quota of 40 percent of women in every kind of management body the EU calls for (older followed by later). I have no problem with even 96 percent of women in, say, the fashion industry (or power engineering if your prefer!). But how can it help to enforce the 40 percent quota in all management bodies, including, for instance, on the boards of football clubs (if they fall under the new regulations)?

What’s more, you just have to remember all those incompetent managers promoted to high-level positions during the communist era just because of their working class origins, to realize that such a transformation can easily go off the rails. What if the social engineers who invented quotas can’t find enough trained women who prefer a management career over their family?

There is a full spectrum of women characters and not everyone of them is keen to be a leader. You can still find many women who tend to think there are strategic decisions in nature where roles should be male only (and women in this field “are often depicted as a danger, a threat”). Even my self-confident wife declares that “while every woman is a cook, the chef is always a man”.

Maybe my daughter will have a different opinion. What I know for sure is that (thanks to social changes) an arranged marriage is just a story from fairy-tales for her. “Oh, where is this world moving to?” as one worried Indian once said to me, “today people marry for love”.