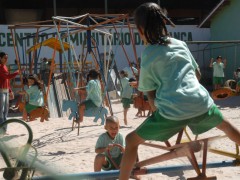 Children play at a free creche in Ceilandia, a satellite city of Brasilia. (Photo by Antonio Cruz/Agencia Brasil, used under Creative Commons 3.0 Brasil)

BRASILIA, Brazil – Like their counterparts across the developing world, working Brazilian mothers are fighting to get their children into government-run crèches, but are finding that a severe shortage of such daycare facilities is forcing them to pay for private care or enter into lengthy legal battles after suing for access.

Unfortunately for them, access to childcare from birth to the age of five is not mandatory under Brazilian law which leaves poorer women who work in cities far from their extended families at the mercy of private child minders or private crèches that charge high fees. This has caused nationwide waiting lists of children under the age of six seeking a place in a government-run crèche. In the Federal District, which includes the capital city of Brasilia, there are 9,900 children aged 4-5 years waiting for a place in public pre-schools, according to Fabiana Bandeira dos Santos, a spokeswoman for the Federal District’s Education Secretariat. In the city of Luziânia, Goiás, 58 kilometers from Brasilia and with a population of 179,582, there is a waiting list of 5,000 children, according to municipal councilor Cassiana Tormin.

In São Paulo, the most populous state in the country, the numbers are even higher. In the capital city of São Paulo alone there are up to 150,000 children on waiting lists.

Silvânia Fernanda Neri Farias, 30, has lived through the stress of trying to find a place in a public crèche for her now 7-year-old son Kauã. Living in the satellite city of Paranoá near Brasilia, Silvânia is a single mother who works as a maid cleaning houses in the capital. Two years ago she went to the only public daycare center in Paranoá to enroll her son. She was turned away and told that all the places were filled and that her name would be placed on a waiting list. They never called, so she was forced to enroll Kauã in a private daycare center that charged her R$300 (US$135) a month in tuition fees.

“I think they give out the slots to their relatives and friends, that’s why I never got a spot for my son,” Silvânia complained in an interview.

Earning only R$900 a month (US$470), Silvânia felt squeezed paying her son’s tuition, rent for the rooms she lived in and food. She was only able to afford the private school because some of her employers moved to pay part of the tuition fee each month. She finally was able to enroll her son in a government-run school last year when he turned six. At the state school, her son does not pay any tuition fee and gets a free snack every day.

Silvânia Fernanda Neri Farias working at the home of one of her employers in the Lago Sul area of Brasilia. (Photo by Rasheed Abou-Alsamh)

After giving birth to her second child early this year — another boy called Kaleb — Silvânia has been forced to use a private childminder again to take care of her baby when she goes out to work. “I pay my childminder R$25 a day to look after my baby and take Kauã to school every day at 1pm, when I’m working,” she explains. This is a big chunk of her daily earnings, since Silvânia only makes R$80 (US$36) for a day’s work.

Federal and local governments are well aware of the severe shortage of daycare centers across Brazil. Brazilian President Dilma Rousseff just signed into law a new provision that will use 75% of all oil royalties for concessions granted after 2012 for promoting education.  According to the Ministry of Education, the first installment of R$770 million (US$350 million) is expected in the next few months, giving a total of R$19.6 billion (US$8.88 billion) by 2022, or a total of R$112.25 billion (US$50.97 billion) in ten years

In Luziânia seven new crèches are being built with the help of federal funds, while in the Federal District they plan to build 111 education centers (crèches with pre-school) by the end of 2014, which will cater for children aged 0 to 5 years. According to the Education Secretariat, 46 units have already had their construction bids completed, and 37 are undergoing construction. There are 7,851 students enrolled in the seven public crèches of the Federal District (from 0-3 years of age), and 33,498 students, aged 4 to 5, enrolled in pre-school.

Increasingly in many parts of Brazil, parents of young children who cannot get them enrolled in public crèches, and who cannot afford private daycare, are being forced to sue the public authorities in court in order to get a place. (Click here to see a UOL slideshow of parents that won places in crèches for their children after suing the authorities.) But often, even if they do get a court ruling in their favor, some parents still cannot get their children enrolled because of the severe shortage of places.

Public prosecutors have also resorted to fining cities that have not significantly shortened the huge waiting lists for places in public daycare centers.  The city of Registro, in the state of São Paulo, was recently fined a record R$170 million (US$77 million) for not shortening its waiting list. The fine was bigger than the city’s budget for education for a whole year which comes to R$105 million (US$47.52 million).

As soon as the city was informed of the fine, they countersued, alleging that even if they paid the debt over 11 years, the repayments of R$15 million (US$6.78 million) a year would paralyze the city.  There are currently 536 children on Registro’s waiting list for daycare.

In the capital city of São Paulo, the local governments of various regions have been fined R$200 million (US$90.5 million), which has led public prosecutors to consider allowing that fines be turned into the new classrooms that education authorities would need to build in order to offset the fines.

Public prosecutor João Paulo Faustinoni e Silva told the UOL website that prosecutors are looking at alternatives to fining cities in order to get more daycare centers built. “We study alternatives like blocking or redirecting the budget allocations of cities in order to use this money for building new schools,” he told the site. In some cases, Silva said that prosecutors have asked that money earmarked for advertising be transferred to education.

Some public crèches also keep their students in school from 7 am to 6 pm, serving them breakfast, lunch, dinner and snacks every day to help low-income parents.

It is clear though that these creative and sometimes desperate measures are not enough to ensure that every young child in Brazil gets free daycare. Working parents struggle to make ends meet, and without free daycare centers in which to leave their children while they go out to work, they are subject to incredible stress, both mental and monetary. Federal and state governments need to do much more to accommodate the hundreds of thousands of young Brazilians who deserve a chance to get a good education, even those too young to be in primary school.