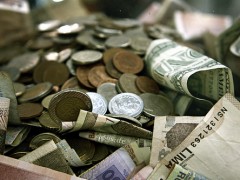 Central American governments benefit greatly from the money migrants in search of better work or study opportunities send back to their families: could this explain the lack of effective youth employment policies that would keep these young men and women in their countries at the government’s expense? Remittances have become a major part of the economy of Latin American countries. According to the 2010  study  by the Multilateral Investment Fund (FOMIN in Spanish) of the AIDB , income from remittances in developing countries by far surpasses the amounts received from foreign direct investment  (FDI) and external development aid.

FOMIN also states that remittances are crucial to the families receiving them as they are either used to cover basic needs in health and education, or are saved and invested in homes, businesses or in social and community needs or infrastructure. As FOMIN shows, those families who receive remittances are better off than similar families who don’t. Yet these remittances do not necessarily come from migrants in developed countries: many of them are from south-south migrants, those who move within the region. Take Costa Rica and Nicaragua, for instance, where a recent study by the Central American Academy in association with FOMIN has shown that such remittances have reduced the number of families living in extreme poverty by 20% and diminished the number of those families living in moderate poverty by 17%. So who are these immigrants? Most of the Nicaraguan immigrants in Costa Rica are young,71.3%  of them are aged between 18 and 39, and most of them are women. The majority migrated in search of better work opportunities and higher income both for themselves and their families. Last week I took part in a regional forum organized by the Friedrich Ebert Foundation on youth employment policies throughout Central America and brought together young representatives from 7 different Central American countries to discuss the situation of youth employment in their respective homelands. The bottom line throughout Central America, they agreed, was that governments are not doing enough to ensure that youth are guaranteed decent jobs – too many youth are either unemployed, underemployed or have jobs that don’t meet minimum labor guarantees. As Jonas Prising, president for the Americas at the ManpowerGroup, said in an interview in the Latin America Advisor:

Youth unemployment is a pressing issue globally, and particularly in Latin America, where 15 to 30 percent of young people are unemployed, two to three times the rate of adult unemployment in the region. With this significant employment disparity, youth are losing hope of finding jobs, and many have stopped searching for work altogether.

It all seems to add up: youth have no opportunities because their government doesn’t provide them with jobs; or when it does, it fails to provide the education and tools needed to access them. Youth migrate in search of better work opportunities and then send money home. This provides their country with “free money” that serves to help the economy and make the poverty statistics look better. And people are noticing. In early September, a group of Nicaraguan bloggers joined up with Global Voices Online and organized a blogging festival, a 10 day virtual event where they all wrote about migration issues. Oscar Blanco wrote an aptly titled post for the festival Better keep them there where he argues that the Nicaraguans who have migrated continue to do things for a country which has turned its back on them and which now sees them as an valuable part of the economy while simultaneously denying them the right to vote from outside the country and stopping them from opening accounts in the national financial system without showing up in person with their ID. It seems that the Nicaraguan government is intent on keeping this 10% of the population who provide 20% of the gross domestic product (GDP) very much at arm’s length. Frida Guez also writes on migration for the festival. She touches on what she calls ‘educational migration’, a small but growing migration trend that shows that education is not always the key to better employment. In Nicaragua, university graduates facing unemployment, a job at a call center for 400USD a month or the possibility of studying overseas, unsurprisingly take this last option. Those who apply for scholarships are the cream of the crop: with high GPAs, knowledge of English, work experience and testimonials, they earn their scholarships and leave to study. Some return to Nicaragua to get a job because a diploma received overseas is worth a lot more than a national one. Others find themselves overqualified and unable to find work that pays what they believe they are worth and so decide to opt for yet another scholarship rather than go into “labor prostitution”… but some decide never to return because going back to Nicaragua would be a sign of failure. Yet failure here is all on the part of Nicaragua itself, because as Ms. Guez says:

As an immigrant, I see myself reflected in all these issues. My parents migrated to different countries and had children of different nationalities because they were looking for the work and educational opportunities that their own country couldn’t provide. I’ve lived more than half my life in Costa Rica, a country that feels like home but where I am not a citizen. I’ve tried to go back to my parents’ homeland, Colombia, to find my roots only to rediscover what people already knew: that there were no jobs and education was either too expensive or only for the fortunate few who manage to get into state universities. Going back to the country where I was born, Peru, means going to a place without family or connections, to a country I’m only connected to by a passport. I send my parents money each month and I know that it helps them make ends meet, and I had to figure out how to get it to them once the wire transfer offices closed down in their town. My story is very similar but yet at the same time incredibly different to the stories of all the other south-south migrants. It is also a story of youth migration, of family reunification, of migration in the search of better work opportunities and better education. Governments need to put in place educational reforms that address students’ needs to learn the skills required on the new job markets. Decent employment policies and first-job programs for youth that don’t jeopardize their labor rights and chances of fair renumeration. A system that acknowledges that migrants are a vital part of their homeland economy and recognizes their need to keep up strong bonds with their country and families by allowing them to vote overseas and be a part of the banking system. The benefits of remittances cannot be placed above the employment needs of youth in Central America.