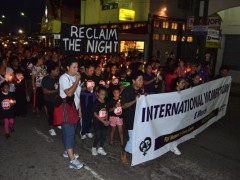 The high rate of violence and abuse against women in Fiji is having a negative impact on women’s ability to participate in economic life. Abuse is not just physical, it can also be emotional and financial. The financial abuse suffered by women in Fiji highlights a flaw in governance that must be addressed before Fiji can meet its economic development goals. It is widely acknowledged that participation of women in the economy leads to greater economic development. As Christine Lagarde, Managing Director of the International Monetary Fund said in this article on Project Syndicate, “the ‘glass ceiling’ is only a small part of the issue. The broader question is whether women have the same opportunities as men to participate in labor markets in the first place.” The United Nations Entity for Gender Equality and the Empowerment of Women suggests that “there can be no meaningful progress if women, who comprise half of society, remain out of the mainstream of society and do not have access to opportunities, including those of quality education, healthcare, employment, protection from violence, and participation in decision-making processes in society, as well as ensuring their rights.”

Despite such declarations on the international stage urging women’s empowerment and participation, the reality is that violence against women is an extremely underestimated barrier towards national economic development. There is much more involved in it than a change of policies at  government level: all segments of society must be involved in order to effectively address this challenge.

Recent surveys conducted by the Fiji women’s crisis center (FWCC) have revealed that Fiji is among the worst countries in the world in terms of violence against women. Some of the statistics in the survey are cause for serious concern:

The biggest concern of all is that 60 percent of women who face violence in Fiji believe that it is acceptable and do not report it. The Fiji women’s crisis center (FWCC) coordinator Shamima Ali admits that there needs to be a distinct change in the way society thinks for there to be any kind of improvement in Fiji’s economy.

“Violence against women has had detrimental effects on the Fijian economy. A lot of women live in fear and feel inferior to men and are unlikely to further their education or become independent. Abuse is not just physical but emotional and sexual. Women believe that they have to engage in sexual intercourse with their husbands on demand and they become susceptible to sexually transmitted diseases like HIV. Women also believe that their male partners have the right to discipline them using physical or emotional abuse,” said Ali.

In a report compiled by the FWCC it was found that 21% of women had her husband/partner refuse to give her money for household expenses. Ali added that women who are injured are rendered unproductive because of their injuries. Valuable resources are wasted on hospital bills, medication and, unfortunately because of the terrible attitude some men have towards women, police resources are also wasted dealing with these cases if they are reported. Women become traumatized and experience high rates of depression as a result of ongoing abuse which in turn affects their productivity and contributions to society. Research has also shown that more than 1 in 4 partnered women (28%) in Fiji were subjected to at least one type of economic abuse:

This type of control over women is more prevalent in rural than urban areas, and this is mainly due to a much higher rate of economic abuse in the Eastern division, where it affects 42% of women. In five years there have been 4000 reports of abuse. However, these are only the cases of abuse which get reported. There are allegedly many more cases which remain unreported to authorities.

This shows the immediate need for changes of mentality and tradition. Men need to be educated from a very young age about gender equality because the current systems are just not enough to curb the problem. But women also need to be made aware of their rights so that they take action when abused. Fiji is at a very critical stage of development with the 2014 elections and a return to democracy looming and this is one issue that needs to be addressed urgently to help the small island nation build a strong economy.

One of the key goals is to educate people to report violence against women instead of stifling it in an attempt to “keep the family together”. The need for more women to participate actively in the political arena and in nation building is another one of the FWCC’s long-term goals which is being advocated around the country. Getting religious organisations, which play an absolutely pivotal role in Fiji, on board is also extremely important to achieving gender equality.

The Reclaim the Night March proved to be peaceful. Photo by the FWCC