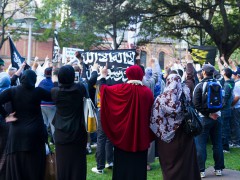 Conflict is an inevitable element of human societies.

From the first Neanderthal to club his fellow caveman on the head, to the ‘Muslim riots’ of the past week, conflict has been a part of human history and will continue to be so.

Religion, culture and nations play a large part in how conflicts begin, evolve and conclude, however none are necessarily more prone to conflict than another.

A quick look around the world sees Muslims, Christians, Hindus, Jews and Buddhists all at war, with each other and themselves.  At the same time, cultures and ethnics groups are forever in conflict – African, Indigenous, Western, Arab, Chinese, and so on.  Finally, police states continue to persecute their own citizens, the few remaining Communist countries still restrict the political and economic freedoms of much of their populations and democracies occupy in the name of freedom.  Even at a base level – friendships, marriage, workplaces, and the self – conflicts exist.  There is no religious, ethnic, cultural or national pre disposition to conflict, the only commonality is humanity.

Reconciliation and power sharing present as the best peaceful settlements to conflicts.  When implemented successfully they have ensured a level of peace remains between individuals and their societies.

In Kenya, Zimbabwe and Ukraine political power sharing arrangements have seen the containment of volatile conflicts.  Meanwhile, following apartheid in South Africa, genocide in Rwanda and Cambodia and civil war in Sri Lanka, reconciliation was and is being used a means to avoid sliding back into armed conflict. Also Australia, a largely peaceful country, is also undergoing a less formal process of reconciliation with its Aboriginal population, with federal governments and private enterprise, striving to ‘close the gap’ between indigenous and non indigenous health, education and employment.

The Arab Spring revolutions will offer the opportunity for those societies to reconcile from recent violence. Thus far, Tunisia has proved the most successful and Syria, still in conflict, the least. Whether they choose power sharing, reconciliation or another home grown version of peace, Tunisians, Libyans, Egyptians, Yemenis, Bahrainis and Syrians have it within themselves to exist peacefully if they choose to.

Conflict is a part of human nature and will be with us forever, however the response to it is not naturally violent and peace between individuals and societies can exist – if we choose it.