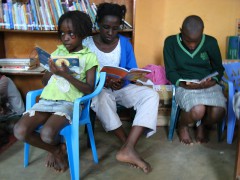 Victoria Masika can hardly speak her mother tongue. If Victoria attempts to speak her parents’ native language she does so with an imperfect accent. “Many times I feel embarrassed when my peers speak our mother-tongue very well; which I can’t,” she says.

Victoria, 20, is now in her first year of university education. She speaks Luganda, one of the widely spoken native languages in Uganda. But Luganda is not Victoria’s mother-tongue. Her native language is Lukonzo. Just like Victoria, her four sisters too cannot speak their mother tongue. They only understand but can’t speak it.

In Victoria’s family, it is only her dad and mum who speak Lukonzo to near perfection. Her parents migrated to Kampala 20 years ago. Like Victoria’s family, many Ugandan families that live in Kampala today are losing their grip on their mother tongue to Luganda, which is the most spoken native language in the city. This is a worrying trend for mother tongue advocates. This is because speaking one’s native language is not just a medium for day-to-day communication but a vehicle for preserving cultural heritage;passing cultural sayings, teachings and wisdom across generations.

“My parents never taught me my native language,” Victoria laments. “My sisters and I just sit at the table and watch dad and mum speak Lukonzo. We simply listen and reply them in Luganda or English. We can’t sustain a 10-minute conversation in our mother tongue,” she said.

English which is Uganda’s official language is only spoken by a few educated Ugandans. Perhaps it is now more than ever for parents to teach their children both native languages and English while striking the balance right. However, some commentators argue against enforcing local languages because the world has literally become a global village.

Uganda is the only East African Community member country without a national language. Every time our parliament attempts to move a motion for a national language, the debate often turns emotional. The proposal to adapt Swahili as the national language has often met stiff resistance from native Luganda speakers, who form the most populous tribe in the country.

It is believed that mother tongue gives a person’s real identity. Why then are many Kampala elites and city dwellers sacrificing mother tongue at the altar of modernity?

Rural-urban migration, higher levels of education and a mix of different cultures in urban areas are some of the reasons why “native languages are under threat of extinction”. For many Kampala families it feels great to speak English in their home. But the loss of grip on native languages is not limited to Kampala alone. Even in rural areas language accents across generations keep changing.

Isaac Masakala, a lecturer at Makerere University’s Institute of Languages, says the importance of the mother tongue cannot be overemphasised. “One’s native language is a vital part of culture which binds people together to make them kinsmen. Languages are the most powerful instruments of preserving and developing our heritage,” Isaac said.

As globalization spreads across the world, it seems we are gradually losing our languages. With time, the smaller native languages will slowly become extinct due to education, career, commerce, migration, etc. Migration to different parts of the country or abroad has seen the mother tongue slowly fade away.

It is common to find several Ugandans who have lived abroad that have ‘lost’ their Ugandan accent when they speak English or any native language. The same applies to Ugandans, like Victoria’s family, who have lived in Kampala for long. They often have different accent of native language compared to their rural counterparts. Intermarriages are not helping native languages any better.

Today, most middle class families in Uganda feel it is prestigious to speak English in homes. They care less about their mother-tongue. Yet, even when Ugandans who have attained a certain level of education can express themselves in English, they are always not (and may never be) as good at English as a “native English speaker”. If the neglect of native languages continues, we might have a lost generation.