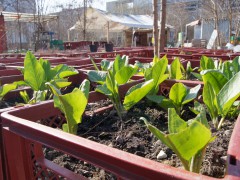 The Prinzessinnengarten is an open garden in the middle of Berlin, were anyone can lend a hand, plant vegetables, learn about ecological agriculture and foster biodiversity.

The garden was opened in 2009 on a 6000 m² vacant lot. Today the garden brings together hundreds of neighbours and friends. It consists of mobile beets where anyone can plant something or take care of a plant. The beets don’t belong to anybody, they are the result of common work. People who lend a hand can purchase the produced bio vegetable to a price lower than in the low cost supermarkets. Others will have to pay some more.

The Prinzessinnengarten is an interesting way of making quality products accessible to a wider public, fostering knowledge about nature and relations between neighbours. And in a sense, it enables the people to reappropriate the city.