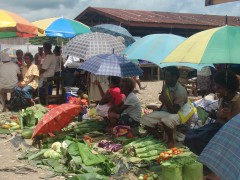 Free trade has yet to become a topic of daily conversation for  people in the Pacific but it certainly figures large in the political arena where Pacific leaders have been under considerable pressure to sign free-trade agreements. Standing behind them are the big brothers – Australia, New Zealand and the World Bank – flexing their muscle to open up the region’s economies. But what will free trade mean to the Pacific islands?

If you mention ‘free trade’ to a young betel nut seller on the streets of Port Moresby or to the woman selling kumara (local sweet potato) in the main market of Honiara, they would probably look at you with confusion: “Iu tok wannem?” (What are you talking about?). Free trade is something that has yet to enter the daily vocabulary of ordinary people in the Solomon Islands, let alone the Pacific region.

But I know that conversations on free trade are definitely taking place in  diplomatic circles. In fact, Pacific Island governments have been under extreme pressure from the World Bank, the European Union, Australia and New Zealand for some time.  The pressure is on the Pacific to ease its trade regulations and open up its markets to foreign goods and services.

So I was relieved to read an article on the Pacific Network on Globalization which highlighted Pacific leaders’ overwhelming rejection of free trade at the Pacific Parliamentary and Political Leaders Forum held last month in New Zealand.  Why did they reject it? The reason is that the Pacific Island economies are very small which makes them all the more vulnerable to the instability of global markets and to cultural and environmental exploitation. Any of us who are familiar with what goes on in the Pacific can provide any number of examples of cultural exploitation and environomental devastation.

Thank goodness the political leaders attending the Forum had some common sense. The big brothers – the World Bank, Australia and New Zealand – missed the point that the Pacific Islands, unlike other countries, are highly self-sufficient.  Where else in the world would more than 80% of land under customary ownership make it possible for people to live off their land?

For me, removing tariffs and regulations would signal the end of village markets and subsistence farming which underpin the local economies of the islands.  A flood of foreign imports, particularly food, would make it difficult for smallholder farmers to compete on prices.

As I have witnessed in Papua New Guinea and the Solomon Islands, many households are already selling surplus crop from their kastom family gardens in order to purchase noodles and rice which are not locally grown but imported from overseas.  If free trade is introduced, I can only imagine that kumara, yam and other staple root-vegetables would be replaced by poor quality instant noodles and rice. And what impact would this have on people’s health and food regimes?

Free trade could also reduce people’s ability to be self-sustaining. If imported foods are cheaper for people to buy than to grow themselves, then there will be a major shift from subsistence production to mass consumption. What would this mean to people’s connection to the land and how they see the land?  It will no doubt impinge drastically on the culture of the Pacific people.

What it comes down to is not free trade but fair-trade: a trading system that does not undermine local businesses, small-scale agriculture and the self-sufficiency of the island people. It also needs to be fair so that there are tangible benefits to communities and not just to the countries and donors who are pushing for free trade.

I will end by reminding the big brothers – Australia, New Zealand and the World Bank – that the Pacific people have been trading for thousands of years so they are no strangers and no newcomers to free trade. Let’s not forget that!