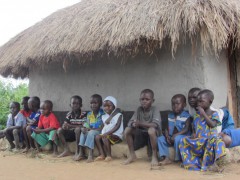 How do we help everyone in the world to become equal? Is that possible? Yes, but we need to have ambition. Ambition, the desire to change the world, desire to be a better person etc. is not something inherent. Or is it? So how do we help a continent with vast resources and a population of about 200 million youth to be mindful of ambition? Do we get governments to introduce the ‘ambition to see change’ as a subject to study in the curriculum? (after all patriotism has made its way to the Ugandan school curricula).

This world is very unfair. I say that because I realize that we can never be the same. And that has nothing to do with us. It has everything to do with the DNA genetics of this world. I said this after observing my cousins that have never been able to leave the ‘village’ or country side. When you interact with them they are so stuck in their thoughts, they have no ambition whatsoever, they do not know how to ask for help and they don’t mind getting on that way. One of them graduated with a Second Class Upper bachelor’s degree and that’s about it. He has no intention of doing anything whatsoever. After his studies, he did try to get a job, yes. But after that the next step was marriage. That was so big a deal that he gave up one of the little assignments that he was given because he had ‘family’.

These Ugandan children need to have ambition to catch up with the rest of the world. Photo by Mubatsi A. Habati

We cannot blame the economy in this case,  nor youth policy on getting jobs after University. He had the chance, but did not take it. He still has a chance but has decided that he will instead live with his mother, even when he has a family of two. It is a question of mentality. How do we explain this, I wonder?

In my opinion, the desire to be more is what sets us apart. It is what will distinguish the poor in heart and the rich in heart. Because the truth is that for those that desire to be more; life does happen to them as they wish. The universe finally conspires with them and they are able to do more and be more.

Education in Africa today is a huge driver of inequality. A report by “The Brookings Center for Universal Education” shows so. According to this report, only about half of sub-Saharan Africa’s 128 million school-aged children currently attending school are likely to acquire the basic skills needed for them to live healthy and productive lives.

Education has a huge impact on mindset. Education is supposed to ‘make us better’. The report suggests that if you are a poor, female child currently attending school in a rural region you are far more likely to not be learning the critical skills, such as reading, writing and math. This report says that the learning gaps are very noticeable in South Africa, Uganda, Malawi, Zimbabwe, Lesotho and Botswana. I know that with the current status of Universal Primary Education which is a government initiative for free education in Uganda, the results are appalling. A primary seven drop out in rural Uganda can hardly express themselves in English. Whereas in urban Uganda, a primary three school dropout is very eloquent.

Education leads to ambition. You do not have to agree with me as far as this theory is concerned, but we need to teach more ambition or if not, improve the quality of education in our schools. Show the young people of this continent and our countries that we can be more, that they can be more. But they have got to want to be and do so.