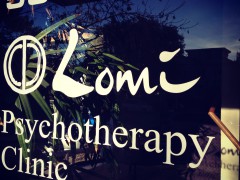 “America,” “affordable,” and “health care” — three terms that just don’t seem to go together, at least for those of us in lower income brackets. A trip to the emergency room can set even insured American citizens back thousands of dollars. That’s why, when I left my adopted home in Germany for an extended stay in California, I figured it would mean an inevitable break in mental health treatment. That is, until I visited the Lomi Psychotherapy Clinic.

The Lomi Psychotherapy Clinic serves the community’s neediest –including those who don’t have legal documentation or who, like me, don’t have US health care. The center treats some 300 patients at any one time on a sliding scale, providing around 1,000 hours of therapy every month.

Lomi certainly is a serviceable response to America’s seemingly intractable health care problem. Staffed by certified therapists, some still in training, donations help keep patient fees low – less than $40 per session on average – making Lomi a magnet for some of the community’s most challenged cases.

The clinic’s mantra is one of meditation-oriented “mindfulness,” an approach to treating mental health that is receiving growing attention – even from the hardcore US Marine Corp – and its emphasis on the body, known as somatic therapy. But when the non-profit first opened its doors back in 1987, mindfulness was pretty new on the scene and the medical community likely viewed it with even more suspicion than therapy itself — a practice also not widely accepted at the time.

The clinic nevertheless succeeded in proving itself over the years, so much so that the county’s Behavioral Health Department recently decided to send its own crisis patients Lomi’s way vis-à-vis the Mental Health Services Act. But most people find their own way to the Santa Rosa clinic. Lomi co-founder and clinical director Thomas Pope, MFT, recalling the difficult economic years in the late ‘90s, told me he’s seen clients show up at the door in all sorts of circumstances.

“It was just shocking, how many people were living under bridges and coming in for therapy, how many people were having to stay in their cars at night because they couldn’t find a job or housing, and yet they wanted to come in for care, for therapeutic care,” he said. “It was very disheartening and inspiring, of the resilience of people, and how much people want to stabilize, to reach out for care.”

It is equally disheartening how often the medical establishment fails such patients, according to a longtime nurse who works in intensive care at Santa Rosa Memorial Hospital. The nurse, who asked to be identified only by her initials A.H., told me by e-mail it “seems clear to me that these people who leave the hospital, and are deemed ‘safe’ to go back to their environments, don’t have the resources to heal from their emotional illnesses.”

There’s a reason for this, and it’s not unique to Santa Rosa, California. Hospitals have a vested interest in discharging patients relatively quickly in order to make room for other (often waiting) crisis patients, but psychological assessments are often required for discharge. So it’s easy to see why such appraisals are completed as efficiently – but not necessarily as honestly – as possible. They can become wrongly incentivized, the focus being turnover rather than an honest assessment of need. This is particularly hard to curb given the subjectivist nature of psychological assessment. Thus, in many American medical communities, the process has turned into a passive discouragement of extended care. For example, A.H. said her brother, himself a clinical psychologist, described the evaluation his wife received as “bogus” from the hospital after she attempted suicide.

According to A.H., her sister-in-law’s assessment “was in no way thorough and conclusive enough to know the degree of pathology that was involved.”

“As a nurse working intimately with depressed and suicidal patients and families,” she said, “I’m most often astounded by the depth of emotional ill-health that they display.”

Mental health is a big problem in America, affecting one in five people over the age of 18. A January 20, 2013, report from the U.S. Substance Abuse and Mental Health Services Administration found that half of the 4.9 million American adults diagnosed with a mental illness but not receiving care say they cannot afford it.

Therapist Alice Petty-Hannum, MFT, who has a private practice in Santa Rosa, described Lomi as a “really great resource for the community” for that very reason. (Petty-Hannum told me she used Lomi’s services herself at one time.)

“When I do intakes with clients, if it seems they can’t afford my fees, Lomi is a really good referral resource, and I especially like them because I know that the clients will get quality care there,” she said.

Therapy is expensive. Each client session costs Lomi $55, but their fees range from pro bono to $40, depending on the patient’s circumstances. Fundraising and donations help cover the difference. While Lomi may not be a sustainable model for America, it’s still a laudatory one.