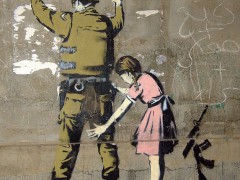 Asked whether conflict is part of human nature, my reply would be pretty straightforward, quoting Aristotle: “We make war that we may live in peace.”

This is not some rhetorical trick just to get away with a witty reply. And neither my title nor my reply are gratuitously provocative, by the way. The keyword for me is “conflict”. Conflict is defined as “a serious disagreement or argument” and can be translated as “a prolonged armed struggle” or “an incompatibility between opinions, principles, etc.”. I like conflicts as much as I despise consensus, precisely because when everyone seems to agree, nobody is in fact happy with the outcome and no actual progress is made on the fundamental things that really matter.

Such an assertion is a kind of shortcut that may seem somewhat counter-intuitive. How come getting into an argument with people is deemed “good” when it is basically associated with discomfort and tension? My proposition is that these negative feelings are determined by the dominant moral system within which we evolve and whose rules we have learnt to act upon in order to be “integrated into society”. Snobbery aside, there is room for discussion in more or less every single word in that sentence. For instance, Roma are not “integrated into society” in Bulgaria, a country whose citizens Roma people actually are. And when I say “citizens” I do mean citizens: they have the same rights and duties as the non-Roma. Thus, when some egghead asserts Roma are not “integrated into Bulgarian society”, does such a claim reflect anything other than everyday racism? My guess is that it does not.

And still, this is the way fundamental changes start and are sometimes achieved. I’ll spare you a history lecture, but just mention that bunch of women protesting in the 1960s for the right to interrupt pregnancy and access contraception. Or just think of the small crowd that went out on the 25 January 2011 in Egypt and the big things that followed. These black sheep are the insane ones who prefer conflict to consensus. And they are the ones who achieve real change by questioning political, social, and economic orders… that is, all the stuff stuck in the groove of what we call a “consensus”.

Getting back to the initial question: yes, conflict is a part of human nature, and – more importantly, – an integral part of the bright side of human nature. A society’s moral value system determines how conflict-prone a society is and what forms of conflict are acceptable. Consensus is, by default, the sane situation where everyone implicitly agrees with the moral value system that cements society, even if some of its rules may harm individuals. So conflict appears as the prerogative of the insane precisely because it questions the fundamentals of the consensus (and is just plain scary). But let’s think of the particular moment in time and space when you realize that your society’s moral value system not only harms individuals but also fails to serve the general good. That’s the moment when we end up embracing conflict so that we may live in peace.