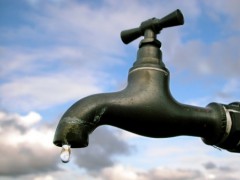 Pakistan has long been a country recognized for its agriculture-based economy – whether after primary, secondary or tertiary processing is beside the point. Our exports-based economy really is based on agricultural produce – ranging from wheat and processed cotton to rice.

Honestly speaking, this fact is stressed upon us so forcefully during high school that anyone having completed this level of education can tell you that the proportion of Pakistan’s population living in rural areas is ~67% and that the agricultural sector contributes around 25% to GDP and employs 45% of the country’s active labor force.

To move off on a tangent now – consider this as an intermission if you will – I’d like to tell the story of an average household in country’s capital. And for the sake of the present topic, let’s call it a water story. In any regular household in Islamabad, one member of the household is designated to see that all other family members have a reasonable supply of water for the day. For this particular person the day sometimes starts in the wee small hours of the morning or the wee small hours of the night – an interesting predicament indeed.

What actually happens is that this person turns on the ‘water motor’, a 1-3 hp AC motor placed on the water supply line, to draw water into the house’s water tank/reservoir since the state cannot deliver the water which it bills in the utilities through these lines. The delicate balancing act that our poor friend goes through usually has to be done discreetly in the hours of the day when there are fewer people in the neighborhood doing the same.

Oftentimes, our householder is unlucky and cannot draw in any water despite all their pitiable attempts – which are illegal, mind you – so they have to buy water from external contractors. Four such bad days in a month mean that the cost of the water bought exceeds the entire total of the utilities billed to the household.

Near the house, we have a set of neighbors looking for a way out of the same frustrating predicament. Their solution is to have a well bored into the ground to solve their water problems. Our imaginary friends are considering the same solution to their problem.

To go down another completely different road, so far we have mentioned the importance of agriculture to Pakistan’s economy and social and cultural setup and have gained a little insight into what life in its capital is like. Now we’ll try and concoct something more to exercise the imagination: If Islamabad, the country’s capital, is so water starved, what about the rest of the country and, more importantly, what of the critical agricultural sector and the rural areas?

Assuming that three pauses and a resumee are ample time for the reader to imagine a worst case scenario, let me explain just how critical things really are. The Indus Basin is one of the most intensively exploited agricultural basins in the world and consists of one of the largest irrigation systems the world over. The development pressure on water resources, i.e. the percentage of available water supply relative to total water resources, is as high as 89% for this region.

Unfortunately, it is also one of the most inefficiently utilized irrigation systems in the world with a water utilization efficiency of USD 3.34 per cubic meter – mere peanuts compared to the ~ USD 24 of other top food producers. Compounding these problems further is the unusual but very Pakistani outlook that says ‘happy-go-lucky’ right back at life.

Effectively, this means that besides being one of the most arid agricultural countries with just 240mm of annual rainfall, Pakistan also has one of the smallest water storage capacities of all the leading agricultural economies. Pakistan stores only 30 days of rain water whereas its erstwhile ‘buddy’ India stores up to 90 days of water and alone in its western region individual river systems store several hundred days of river water.

Considering that Pakistan’s last major water reservoir projects were undertaken almost half a century ago, this doesn’t seem too surprising. Not only have Pakistanis not undertaken any further significant projects, they have also failed to maintain dams already constructed – all in the name of petty provincial politics.

When you start piecing the picture together, and realize that due to its inefficient yet extensive utilization the Indus Basin is increasingly tending to salinity, you can quickly arrive at some very unremarkable conclusions. Consider, for instance, that Pakistan’s only arable lands are expected to show 30% less produce over the coming years due to climate change. Now also take into account India’s erratic control of its floodgates – so much so that entire river systems in Pakistan can be dry one night and flooded the next – and their impact on local agriculture. Once the pieces start falling into place, it isn’t too difficult to realize what will happen in the long term.

While our hypothetical Islamabad family might not be experiencing life changing challenges, much of the rest of Pakistan – the 68% who rely on agriculture – definitely is. With economic opportunities drying up in their own sector, more and more people are flocking to the capitals of the country – some to Lahore, others to Faisalabad, even more to Karachi. What impact does this have?

Well, honestly, not much more than to add to the misery of these over crowded cities which already have countless people desperately looking for a livelihood. The new immigrants often fail to find any economic opportunities and their dreams turn into nightmares. And what really happens? More and more dependents are created in an economy that neither has the resources to cope with such a problem nor the social welfare infrastructure to deal with it.

The fact that their social lives and the social set up of the rural areas is disrupted is a given: these people lose their social security and often times, finding no succour, resort to increasingly ‘desperate’ measures. On a larger scale, however, a failure of even grander proportions unfolds, streaming proudly despite the heat of the hot June sun.

The most vital contributor to GDP starts shrinking, and people displaced from their occupations fail to find meaningful employment that can contribute to foreign exchange. The struggling economy then takes another turn for the worse, attempting to offset flagging production by rigorous imports, to combat rising inflation by even more inflation and shrinking foreign exchange earnings by rooting itself more deeply in the whirling chaos!

It’s true that poor utilization of the Indus Basin might soon cause it to become an agricultural and economic nightmare. The Himalayan glaciers melt faster than we would like, or all too slowly when we are in need of water. And it is also true that the World Bank declared that Pakistan was in worse straits than Ethiopia when it came to water.

Ten years ago we were a water scarce country, today we are water stressed country, and in ten more years, we will happily have taken an upgrade to become a water famine country. The resources that Pakistan is wasting aren’t just liquid assets, they’re liquid assets in the truest economic sense of the word.

Water acts as the country’s only on-hand reserve with an ability to generate relatively faster economic ROIs and foreign exchange. Without it, what little activity is still seen in the economic ecosystem of the country will vanish in a wisp of smoke. And we too are happily content to let it stream past, like the water itself streams past us.