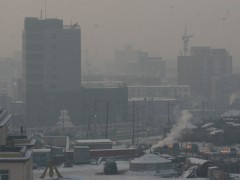 In winter everybody talks about Ulaanbaatar’s air pollution and it has often been mentioned that our home city has become the most air-polluted city of the world.

As written in  UB post Mongolia’s capital suffers from air pollution that harms health and that even causes the death of some of its dwellers. People living downtown are breathing six times more toxic air than normal and those who live in ger districts of Ulaanbaatar are breathing air that is 18 times worse than normal.

But my home town Ulaanbaatar does not always have such dirty air as mentioned. It’s only in winter when outside temperatures fall below minus 30 -40 degrees Celsius.