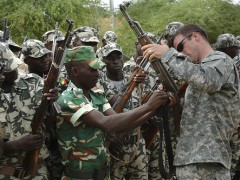 The recent events in Egypt caused me to take a closer look at Future Challenges article on International Day of Peace observed on September 21, 2013;

“Is peace between individuals and societies possible, or is conflict simply a part of human nature? Does it differ from culture to culture, religion to religion, nation to nation?”

On July 3, 2013 less than two weeks ago, after almost a year of public protest for and against democratically elected President Mohamed Morsi and after several warnings from the Egyptian army to address the concerns of the people, General Abdul Fatah al-Sisi launched a coup d’état forcefully removing President Morsi and instating Adly Monsour as the interim president.  Unfortunately for many this is a too common scene in recent years and variable staple in the complex history of Africa.

Less than 4,000km away in West Africa, Mali still reels from the socioeconomic impacts of the coup d’etat launched by mutinying soldiers led by Captain Amadou Sanogo. Serving as a Peace Corps Volunteer in Mali, it was not the day of the coup that is embedded in my memory but the next day, March 22, 2012 and the following days of unrest and confusion that are vivid. Unlike the coup in Egypt there were no yearlong protests by the thousands demanding the removal of then president Amadou Toumani Touré but there was the underlying tension that people were unhappy with how he was managing the country.

Days following the coup the sounds of gun shots would pierce the otherwise deathly quiet that had ensued with the imposition of a dusk to dawn curfew by Sanogo. For many outside of Mali the coup came as a shock with elections only a month away and there was no reason to believe that president Amadou Toumani Touré would not step down peacefully.

However for those living in Mali the air was not so naïve and they knew it was only a matter of time. Int the early part of 2012 the lack of concern shown by Touré regarding the crisis in Northern Mali many believed fueled the flames of rebellion among Malian soldiers. Insurgent groups infiltrated by Libyan battle-seasoned fighters, escaping to Mali as a result of their own Libyan civil war (also known as the Libyan revolution) began fighting a campaign against the Malian government for independence and greater autonomy for the northern area referred to by the National Movement for the Liberation of Azawad (MNLA) as Azawad. Azawad is the northern part of Mali that is comprised of Timbuktu, Kidal, Gao, and parts of Mopti Region making up 60% up Mali’s total land area. These highly publicized coup d’états only scratch the surface of the conflicts that are being experienced across the continent. From 1991 to present day there have been 48 recognized coup d’états around the world with 26 of those happening in and around the continent of Africa, that’s more than 54%, which begs the question why is Africa clearly more susceptible to using conflict rather than peaceful measures to  address inefficiencies in government, regardless of culture, religion or nation?

Human nature plays a key role in the way we address what we believe to be inequalities and injustice. History shows us that in most instances individuals and the masses attempt peaceful resolution before escalating to intense conflict as shown by Tamarod. Tamarod, the grassroots movement who’s aim was to collect 15 million signatures by 30 June 2013 (the president’s one-year anniversary in office) in the hopes of registering opposition to President Mohamed Morsi of Egypt and force him to call for early presidential elections.

This was also witnessed in Mali when thousands of mothers, wives, daughters, and sisters peacefully marched to the presidential palace to talk to the president about the lack of management and resources for their fathers, husbands, sons, and brothers being left defenseless against the increasing conflict in Northern Mali. Many try the peaceful route only to hit barricade after barricade.

Even within ourselves there is conflict, we often here the term “at war with yourself” so it would be assumed that if we are at war with ourselves much less for those in our external environment.  Conflict is defined as a perceived incompatibility of goals between two or more parties; if you believe this to be true than it’s almost a miracle that there aren’t more instances of uprising, revolutions or rebellions. I don’t believe people don’t crave the life that peace has to offer, but to arrive at this proverbial peaceful existence there are significant changes that need to be made and more often than not the masses use conflict as a last resort.

Let’s not be blind to the knowledge that the majority of conflicts arise due to mismanagement of African countries internally and the external influences (foreign governments) which are often the catalyst for some of the continent’s bloodiest conflicts.

Even with the knowledge that a conflict may almost immediate economic sanctions, displacement of thousands and in some cases millions of people, increased strain on already suffering countries, and in some instances the removal from international boards such as the African Union (Egypt was almost immediately suspended from the African union, like wise Mali in 2012). But after years and sometimes generations of being lied to, mistreated, and overlooked like a tantrum throwing child people will scream, shout, stomp their feet, and when all else fails take up arms to get results.

You may ask yourself then; Is peace possible?  I believe the answer to that is yes but unfortunately for Africa the road to this proverbial peaceful existence has been and may forever be littered with the potholes of conflicts, roadblocks of uprisings and speed bumps of coup d’états, and wars.