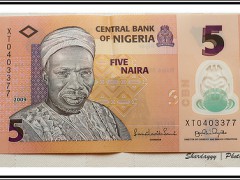 Nigeria has come a long way from 1974 when General Gowon said that the problem was not money itself but rather how to spend it. Sadly, the way since then has been been all downhill.

Back then we spent more on capital projects and infrastructure than on recurrent spending. These days almost 80% of our annual budget goes on salaries, allowances, and overheads (bureaucrat-speak for tea, biscuits, meals, banquets, travel expenses, etc.) We still remember Arunma Oteh’s N850, 000 (£3,437) famed lunch saga, and the N30, 000, 000 (£120,648) she allegedly spent on hotel accommodation in the first eight months of her stint as Director General of the Securities and Exchange Commission (SEC). Of course she denied this, saying she spent only one-tenth of that amount on lunch, but surprisingly has kept mum on the accommodation costs.

Dr. Okonjo-Iweala Nigeria’s Finance Minister is obviously having sleepless nights thinking about ways to keep the country going without having to declare the need for dreaded austerity measures.

Ah, yes! Austerity; the word that rhymes with “recession”, “Greece”, “Spain”, “Tunisia” and “Portugal.” Austerity is the standard response in market economies when the inevitable cycle between boom and bust hits the downslope and governments look to “save costs” – lay off workers, cut expenses, freeze salaries and benefits, and print more money. All as prescribed by the potentates of the International Monetary Fund (IMF), most of whom have never managed even an off-license or a neighbourhood kiosk before, let alone a country.

The baby-faced assassins of the IMF do not understand that a country in which the government itself and its operating activities create most of GDP cannot get out of a recession by shrinking those selfsame activities. And that any attempt to do so only makes recession bite even harder. No, a recession-hit country should spend more than ever before  – but in a more focused manner – on those things that create jobs and increase productivity such as public works, infrastructure and small business incentives. Unfortunately most countries have taken the easy way out and abruptly strangled spending, sending themeselves spiraling deeper into the very recession they sought to avoid in the first place.

Thankfully this is not the case with Nigeria which seems to have avoided the route taken by Greece and Spain and struck out on a path of keeping the economy afloat by increasing productive spending and targeted social welfare. So civil works are still being engineered while funding for new ones has been approved such as the second Niger Bridge at Onitsha, the Mambilla hydro dam/electricity project in Taraba State and a similar dam project at Zungeru, Niger State.

Misgivings aside, the Subsidy Reinvestment and Empowerment Programme (SURE-P) headed by the greatly respected Dr. Christopher Kolade has successfully focused on the proper use of some of the extra income derived from excess crude oil. Unfortunately, the shameless ease with which state and federal governments have spent the rest of the excess crude revenue still leaves a lot to be desired – but that’s a matter for another day.

Essentially the truth is that the proverbial “common man or woman” has not really seen the kind of austerity measures that were introduced in Nigeria in 1982 or recently in places like Greece and Spain. However, the blessing that this ought to confered has been more than offset by the rampant profligacy and corruption that has been the bane of every Nigerian administration since 1st October 1960.

Just remember the case of James Onanefe Ibori – which is only one of many. The former governor of the oil-rich Delta State has recently lost his appeal to have his 13 year prison sentence reduced for embezzling fifty million pounds during his eight year tenure. Commenting on the trial, THISDAYLIVE newspaper writes:

During his trial, the London court was told how the proceeds of the fraud were used to buy six foreign properties and a fleet of cars, although the judge said the total amount stolen might in fact be “in excess of 200 million pounds”.

The biggest single fraud involved misappropriating $37 million in fees when under Ibori, Delta State’s stake in V-Mobile, the precursor to one of Nigeria’s telecoms companies, Airtel Nigeria Limited, was sold and the funds diverted.

Money that should have been spent on infrastructure and developmental projects is been recklessly squandered while a justice system derailed by its own laws and rendered impotent by the loopholes they contain cannot act as an effective deterrent.

Why do we always spoil the good things we do with so much bad behaviour? I just don’t know. What I do know, however, is that sometimes less isn’t more.