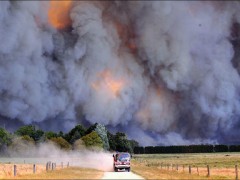 One week before the 2009 Black Saturday bushfires the state of Victoria cooked like never before.  On three consecutive days in late January the temperature exceeded 43 °C / 109 °F, scorching an already desiccated land and laying the foundations for the worst bushfires in Australian history.  On the fateful day of February 7, all previous records became redundant.  Melbourne peaked at a suffocating 46.4 °C (115.5 °F), the hottest temperature ever recorded in an Australian capital city, while the rest of the state sweltered in 46 – 47°C heat.  With winds across the state racing above 100km/h and a decade long drought showing no signs of ending, what followed was exactly what then Premier John Brumby predicted, ‘[the] worst day in the history of the state’.

By days end up to 400 fires had ignited across Victoria, the worst in the now infamous towns of Kinglake and Marysville.  The Black Saturday fires would eventually claim 173 lives, destroy over 2,000 properties and displace over 7,500 people.

Predictably, in the wake of Australia’s worst natural disaster in over 100 years, questions were asked, fingers were pointed and accusations made about those who were in charge, or were at least supposed to be.  With arguably one of the strongest democracies in the world Australia was as well placed as any country could be to deal with a disaster of this scale.

A Royal Commission, with ‘the widest possible terms of reference’, was established in the months following the fires.  Many public figures, those who may have been able to escape or stage manage criticism in countries with weaker democracies, were to come under the most pressure.  Nevertheless, Australian Royal Commissions merely provide recommendations and it would be up to the state government to implement any that were put forward, therefore, public pressure would be needed for the government to act.

In mid 2010, after more than a year of investigation the Royal Commission reported, it found then Chief Commissioner of Police Christine Nixon, CFA Chief Russell Rees, Emergency Services Minister Bob Cameron and Premier John Brumby amongst others, culpable of various leadership deficiencies on February 7, 2009.  They also recommended several costly proposals such as building more refuges, moving power lines underground and a buyback scheme for properties in the most fire prone areas.

During the investigations it was found that Ms. Nixon was dining with friends on the evening of Black Saturday, such was the public outrage against this symbolic revelation that Ms. Nixon was forced to step down from her new position as Chair of the Victorian Bushfire Reconstruction and Recovery Authority.  Similarly, succumbing to public pressure, Mr. Rees also resigned, less than halfway through a 2 year contract and in November 2010 the state government was swept from office, with their dismissal of key recommendations partially to blame.

Victoria’s new state government has since committed $1 billion over ten years to ‘bury’ powerlines in fire prone areas and has allocated at least $50 million to a voluntary property buyback scheme.

Despite the freak nature of the Victorian bushfires, Australia’s democratic process and the Victorian public has shown that our leaders and institutions do not abdicate responsibility or leadership when natural disasters occur, especially when they can be forecast, further, they will be held accountable for their actions and inactions, whether real or perceived.