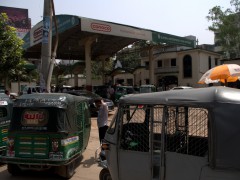 Officeworkers had a half-day, schoolchildren were let out early—crowds formed below a large screen looking over a traffic roundabout in Dhaka, the capital of Bangladesh. It was March 22, 2012, and Bangladesh was competing in cricket against Pakistan for the Asian Cup. After a tense game, Bangladesh ended only three runs behind Pakistan—yet the country still had good reason to celebrate. The week previous, the International Tribunal on the Law of the Sea (ITLOS) in Hamburg, Germany delivered its judgment to delineate the maritime boundary in the Bay of Bengal between Bangladesh and Myanmar. The ruling ended a more than three-decade long dispute between the two countries over large tracts of ocean with seabed potentially rich in natural gas, impeding the management and development of the two countries’ respective ocean resources. Significantly for Bangladesh, the ruling delivered more area to Bangladesh than anticipated and has radically transformed the outlook of the country from heavily dependent on energy imports to even becoming a potential natural gas exporter.

As part of an International Law and Organizations Program academic trip to Bangladesh in March through the Johns Hopkins University School of Advanced International Studies, I had the opportunity to explore firsthand this interplay between natural resources, energy needs, and international law in Bangladesh, and analyze the potential future effects of the ruling in order to ensure it does not become a resource curse for the country.

Issues in Energy Capacity and Delivery

The potential windfall in energy resources would transform a country currently facing a number of severe energy capacity and electricity delivery challenges in the near-term. In 2011, only around thirty-eight percent of the Bangladesh population had access to electricity, an increase in ten percent from ten years prior but still well below desired levels. As more and more rural areas come onto the electrical grid, the need for more energy capacity and better electricity delivery will only become greater.

Around ninety percent of total electricity production in Bangladesh is met by natural gas (89.38% in 2009 according to the World Bank). The dependence of the country on natural gas was made clear a week after the ITLOS ruling, when the power and energy ministry cut in half gas supplies for the transportation and industrial sectors in order to divert it to agricultural use to feed irrigation pumps. In addition, the government decided to close all compressed natural gas (CNG) filling stations from 3pm to 8pm every day to ensure an adequate supply of gas for irrigation.

For the transportation sector, the cut pushes against developments made over the past ten years to shift vehicle consumption from petroleum-based products (gasoline, diesel) to cleaner-burning CNG. The prevalence of CNG auto-rickshaws in Dhaka was a conscious effort by the government of Bangladesh together with international organizations including the United Nations Development Program, the World Bank, and the Asian Development Bank starting in 2000 to take advantage of the country’s relatively inexpensive natural gas resources and drastically reduce the dangerous levels of air pollution in the city.

For the industrial sector, the shut-off of gas only continues endemic electricity delivery issues. Electricity cuts out once every couple of hours, and although the amount of time the electricity is down has improved substantially, the twelve-hours per day shut-off that remains exacerbates an issue that local companies point to as one of the largest hurdles of doing business in Bangladesh.

In addition, Bangladesh’s energy issues are not simply a lack of capacity, but include more systematic problems such as efficiency and heavy system loss during distribution that continue to plague the country’s energy infrastructure (for details on this, see “Power sector reform in Bangladesh: Electricity distribution system” by M.S. Alam et al. in Energy, Volume 29, Issue 11, September 2004, page 1773).

Celebration of the ITLOS ruling is contrasted with severe cuts in CNG supplies. // Photo: Michael Carbone

Because of these issues, a potential domestic supply of stable energy resources from the maritime areas awarded to Bangladesh in the ITLOS ruling is seen as crucial to the country’s further development. For this reason, the March ruling was heralded in celebratory front-page advertisements in Bangladeshi newspapers as “a historical achievement.” The ruling allows the American company ConocoPhillips to begin drilling in the maritime areas it is leasing from Bangladesh, areas that previously conflicted with Burmese claims leased to the Korean companies Daewoo and the Korean Gas Corporation (KOGAS). Bangladesh now seems posed for an energy resource and revenue boon. But whether the ruling will reorient the country’s courts and political forces towards an embrace of international law, accountability, and transparency remains to be seen.

A History of International Arbitration in Energy Resource Extraction

Bangladesh has a checkered history in international law disputes with energy implications. In the Saipem v. Bangladesh case, an ICC tribunal was set up to arbitrate the case between the state-owned Petrobangla and the Italian oil and gas company Saipem. However, Petrobangla successfully convinced a Bangladesh court to revoke the authority of the ICC tribunal to try to avert the arbitration. Despite the revocation, the ICC arbitration continued and the tribunal ruled against Petrobangla, awarding Saipem compensation. As the tribunal set up to recover the damages noted, “the revocation of the authority of the ICC Arbitral Tribunal by the Bangladeshi courts was contrary to the general principles governing international arbitration” (¶31, ICSID Case No. ARB/05/07, 21 March 2007).

Capitalizing on an Opportunity

The influx and sustainability of international investment in Bangladesh’s now-uncontested eastern waters will depend on the companies believing Bangladesh will play by the international rules, whether they go in Bangladesh’s immediate favor or not. But more importantly, the ITLOS ruling on its own will not bring accountability and transparency to the promised boon in resource extraction and help it avoid the resource curse. Bangladesh is not a member of the Extractive Industries Transparency Initiative (EITI), a multi-stakeholder initiative between governments, companies, and civil society organizations created precisely to ensure that such accountability and transparency exists in resource-rich countries. It is this transparency and accountability that will make sure the potential windfall of natural gas and revenue is efficiently applied to Bangladesh’s pressing energy needs.

While the ITLOS ruling can be heralded as a victory for Bangladesh’s energy future and its stance on international law arbitration, it is this opening for the implementation of more permanent accountability and transparency measures that could more profoundly impact the country in its long-term trajectory. In turn, it would ensure that all the potential gains of the new natural gas resources are actually realized. Even the Asian Cup might not be able to beat that.