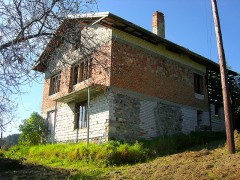 “So now what? You all have graduated and will now flood the capital instead of going back to where you came from?!”

I had just finished my undergraduate school in Blagoevgrad, a southern Bulgarian town, and was having dinner with professors and alumni in Sofia. The above remark came from a cool, popular guy who had graduated several years ago and was already enjoying a successful career in advertising. I was shocked and offended by his remark. I was born in Sofia, raised by grandma in the country, and then went to a university that doesn’t happen to be in the capital. So technically I was from Sofia but at that moment couldn’t say “I’m a Sofian.” I didn’t take the guy’s comment personally but found it cynical and discriminatory. And it stuck in my mind. This was six years ago. Ever since then I’ve been following the flooding of the capital with a scientific interest and have kind of got to understand that guy’s frustration.

Forget about finding a parking spot in downtown Sofia or getting your kid into a state kindergarten, i.e. one that is ten times cheaper than a private kindergarden. When the day comes, parents stand in line from 4 am to enroll their children in a school that is in their neighborhood. It can take five hours to get from one end of the city to the other in the rush hour. And these are only the most obvious consequences of the overcrowding of the capital. The governance, policy and economic implications of this process, as well as anxieties about living standards go much deeper and are more complicated. Tension in terms of housing, transportation, health and social security is rising.

According to the 2011 census Sofia’s population is 1,270,284 which constitutes 17.2 percent of all the people in the country. But these are only the people who have registered their home addresses in the capital and as registration is neither obligatory nor necessary, many people just don’t bother. Some estimates  put the capital’s population as high as 2 million, but more realistically it lies somewhere between 1.5 and 1.9 million. Now this might not sound such a huge number but you have to remember that since the previous census Sofia’s population has increased by 10.3 percent, while the overall population of the country has fallen by 564 331. Only the second biggest city in the country, Varna, has shown an increase and that’s a mere 2.8 percent. Surely and steadily, the rest of the country has been losing its population due to migration and low birth rates. The poorest region in the EU – northwest Bulgaria – has shown a drop in population of over 20 percent. And, for example, in 2004 there were 144 towns and villages that had n0 citizens; in 2011 there were 188.

The reasons people are leaving their birthplaces and migrating to Sofia and a couple of other big cities are mainly economic. They are chased away by the lack of employment and low salaries. At the same time moving to the capital isn’t necessarily a ticket to prosperity.

Krastio, 57, used to work in mines in northwest Bulgaria. When they were closed, he didn’t have much of a choice and left together with his wife to seek work in Sofia. For a while he was with the police, then the army, and today he is an illegal taxi driver. He doesn’t have enough money to buy his own car and after he’s paid the lease and the fuel, he doesn’t have much left. His wife Blaga suffers from epilepsy and has no job. The telephone, central heating and hot water in their apartment in Sofia were cut off six years ago. When they got a bill for central heating of 500 euro, Krastio says he thought he would go to jail because he wasn’t able to pay it.

The process of urbanization in Bulgaria started long before the fall of communism in 1989. 1975 was the first year in which more people lived in cities than in villages. As of 2011 urban dwellers made up 72.5% of the overall population. In communist times the countries in the socialist bloc chose their own course of development. East Germany, for example, preferred to keep people where they were and invest in infrastructure so that they could commute to work every day and be supported by quality social networks of small hospitals and schools. On the other hand, Bulgaria chose to create several huge economic conglomerates in the cities turning them into natural poles of attraction to people.

This is the story of one of the biggest districts in Sofia – “Lulin.” When construction of the Kremikovtzi plant started in the 70s, 30,000 men were brought in from the country to work on it. They were settled together with their families in the specially designed “Lulin” district that today is the largest suburb in the country: with 150,000 dwellers, it’s bigger than most of the cities in Bulgaria.

A solution for failed urbanization?

If the national government and local authorities could offer a strategy and perspectives to develop country areas, both the overpopulated cities and the depopulated towns and villages would benefit. The cities would get rid of tension in terms of housing, transportation, health and social care, while the countryside would get its life back and no longer be the place where people spend their old age or summer holidays. The solution is in active policies for increasing access to work in nearby cities, ensuring better local employment opportunities combined with better education, health and social care. Because it seems that leaving the small town or village is not a trendy option but rather a hard necessity, and Bulgarians are perfectly willing to live where they are born and raised if only they have the proper living standards there.