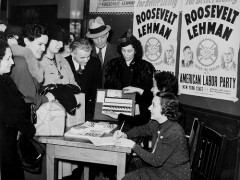 New rules in several U.S. states make it harder for many citizens to vote. The rules – which include restrictive voter ID and proof of citizenship requirements, reduced early voting periods, and disenfranchising former felons – appear to be a dishonest, anti-democratic power grab by the Republican party. As such, they erode the federal government’s legitimacy and its moral authority as a global champion of democracy. But the rules also raise deeper questions of exactly who should be able to vote. For issues such as climate change and biodiversity loss, voting rights should arguably be extended to all people alive today, and maybe even people in the future or non-humans.

The story begins with American slavery: white European descendents holding black African descendents in servitude with no political power. The 1860’s Civil War ended slavery, but the systematic disenfranchisement of blacks persisted. Poll taxes and literacy requirements were among the disenfranchising tactics used, mainly in the former slave states of the south. The 1960’s Civil Rights movement outlawed such tactics, but the urge to block votes lived on. With the recent voting restrictions coming during America’s first black presidency, it is difficult not to see racism (among other things) at play.

In the 2010 elections, Republicans gained control of several state governments. They then passed legislation making it harder to vote. (In the U.S., each state dictates its own election procedures.) The laws were sold as protection against voter fraud, despite there being extremely few instances of voter fraud in the U.S. Occasionally, Republican leaders publicly acknowledge the electoral advantage these laws give them. The logic is simple: low voter turnout favors Republicans because demographics with low turnout rates tend to vote Democratic. By making it harder for people to vote, Republicans end up with a larger portion of the vote. These low-turnout demographics include young people, Latinos, and African Americans.

It is disappointing, though not terribly surprising, to see people more interested in power than in the ideals of democracy. And these people may succeed: the new voting rules could swing some elections, including local and state elections, and potentially even including the presidency. A leading Republican from Pennsylvania – a key state in the presidential campaign – bragged that new voter ID laws were “gonna allow Governor Romney [the Republican presidential candidate] to win the state of Pennsylvania”. The result would be a government with less legitimacy, a weaker claim to a mandate from the American people. This government could also have even more capacity to tweak voting laws. A downward spiral of anti-democracy is possible, especially if the remaining voters continue to support this government. Supporters of democracy should see to it that the downward spiral never happens by insisting that elected officials of all parties support rules that make it easier to vote, not harder.

A weakened American democracy affects not just itself but also other countries. The U.S. likes to think of itself as a “city on a hill”, a beacon for democracy worldwide. Likewise through military intervention and diplomacy, the U.S. tries to promote democracy in other countries. But when its democracy is diminished, it loses the simple power of its example and opens up charges of hypocrisy. With democracies on the rise in such places as North Africa and Kyrgyzstan and on the decline in Hungary, the need for America’s example remains great. Without it, something important is lost.

But the situation is not that simple. There is no one correct formula for determining who can and cannot vote. Here lies a basic paradox of democracy: how can we vote on who is eligible to vote? If we hold an initial election to vote on who gets to vote in subsequent elections, then the results can depend on who happens to be eligible for that initial election. The democratic process must be initiated via non-democratic means. The best we can hope for is that the rules of democracy are initially dictated to follow some core democratic principles. The principle I would offer is that everyone affected by an election should be able to vote in it. This principle is in the spirit of the classic American maxim “no taxation without representation”.

Following this principle would mean putting great effort towards expanding access to voting. To that effect the recent U.S. voting restrictions are a step backwards. But stepping forwards could mean some dramatic overhauls to our democracies. The changes needed can be seen most clearly in the context of global environmental issues like climate change and biodiversity loss. For these issues, one country’s policy affects people worldwide. As I noted in a previous article, this means that everyone around the world should be able to vote in every country’s elections that made decisions about these global commons problems – or, alternatively, that there should be a democratically elected global government to handle global environmental policy.

But that’s just the start. Global environmental issues affect more than just contemporary humans. They also affect many generations of future humans and much of the non-human world. Arguably they should have a vote too, even though it is physically impossible for them to vote in our elections. Some clever scholars have proposed means of getting around this situation, such as by appointing people charged with representing future generations. But none of these proposals can get around the fact that one way or another, contemporary humans hold all of the power. The rest of the world is at our mercy: we are its dictators. For the world’s sake, we should at least try to dictate benevolently.