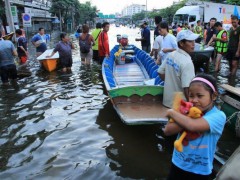 I was in Bangkok last mid-April when it started to pour heavily with rain. I was in Sukumvit Road, the heart of the commercial district. Trying to walk to my hotel, I found that my road quickly flooded with rain within a few hours. I returned to Kathmandu, and followed with anxious trepidation news of the flooding in Thailand via Twitter and Facebook.

The stories of old people guarding their small homes by the river banks worried me. I emailed my friends to find out if they were okay. One had fled her home with her parents, an elderly aunt and two dogs. Another friend told me the bottom floor of her parents’ house, close to the airport, had been flooded. The damage to the city seems immense.

And yet, isn’t water a precious commodity, one we should celebrate if we get more of it? I learnt from a Thai animation made by volunteers to inform the general public that the reasons for the flooding were the artificial barriers constructed to dam the flow of water from the highlands down to the sea, as well as deforestation. With no trees to absorb excess rain water, the waters swelled as they moved towards the city.

As a child, I dreamt of Bangkok as a beautiful city filled with lights, flowered decorations and beautiful women in yellow and red silk clothes. But when I actually went to live there, what hit me was the unlimited amount of concrete, heat and noise.

The noise would rise at midnight to my 8th floor room, a high whine from aerodynamic motorcycles ridden by young men with little regard for speed limits. The noise was unbearable. I longed for spaces with greenery and wooden buildings, the kind advertised in Thai magazines. But those had long since been cut down or taken apart. Perhaps my disillusionment at a city in which urban planners had paid so little heed to green trees and natural building materials was also linked to the water issue—a methodical respect for natural environments, as we see in some European cities, would have incorporated water not just as a side issue but as a central part of the city’s identity.

People told me that many traditional canals, or khlongs, that once crisscrossed Bangkok and were a natural pathway for the rainwater to make its way out to sea, had become disused or closed off. At one time there were so many canals that Bangkok was nicknamed “The Venice of the East.” The canals also acted as thriving marketplaces for “floating markets.”

Sadly, few of these canals still remain—they were filled in and turned into asphalted streets and those that remain are not adequately maintained. Properly managed, the city could take this bounty of water and use it to replenish its canals which also act as public transport arteries for its many commuters. Maintaining the existing canals and creating new ones would certainly be a key solution for both public transport as well as a good way of stopping next year’s floods.

In his memoir “A Missionary in Siam: 1860-1870,” N.A MacDonald writes beautifully about the bamboo foundations of Thai homes build on riversides. The foundations could be moved up and down at will with two sliding pieces of bamboo, and people could adjust the foundation length as the waters rose and fell. This may be costly to do in the era of steel and concrete, but stilts can still be replicated at low cost. Architectural designs which utilize stilts – a mainstay of houses built on floodplains for thousands of years – should also be encouraged by the government to avoid the problem of flooding ground floors. Brad Pitt’s non-profit organization, Make It Right, is building modern homes on stilts, in order to combat future flooding.

If Bangkok paid more heed to its traditional urban planning heritage, where water played a central part, it would not think of water as a threat but as an asset. If there was an urban revival of this tradition of valuing water as both live-giving and nourishing, then perhaps the flooding of the rivers would be an carefully managed annual event rather than a disaster. Then perhaps the women wrapped in yellow and red would return to float flower arrangements in the river once again, creating a dream city.