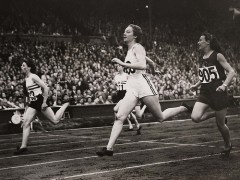 The semi-finals of the women's 200 metres at the Olympic Games, London, 1948. Photo from the National Media Museum, The Commons on Flickr. Public Domain.

Every time the Olympic Games come round, we think about the inequalities of the world. It seems somehow immoral, that huge amount of money spent on infrastructure, advertising and so on when so much could be done with it for the poor in the country hosting the games or elsewhere. We also think about the poor or underdeveloped countries that send delegations which don’t perform as wished, overwhelmed as they are by the power of the Chinese, Americans, Russians, Australians, Germans and all the other big medal-winning nations. Not to forget about the politics and struggles surrounding the games.

But do we really think about this or is just the politically correct thing to do? It is indeed a fact that the inequalities of the world are in blatant evidence at the Olympic Games. We see how countries that value and support their athletes get the best results and the most medals. But this holds true not only for the Olympics but for all the other major sporting events across the world. This is surely an issue we should not lose sight of.

Only what to do about it? I believe nothing. The inequalities and unfairness in the world have nothing to do with the Olympics and everything to do with inefficient governments, lack of resources or resources misused, mismanaged or simply stolen. And yet somehow in the midst of this event there is always some unexpected hero who, beyond all odds, gets a medal or a place in the world’s ranking. They are heros because they’ve been through long years of after work or after class training in countries that don’t consider any sport a serious matter, a career choice, or a valid vocation but merely a distant dream.

Is being an Olympian a dream? Oh, yeah. It is for countless people. The message of fair play, team effort and individual achievement through honest work is so powerful that it makes doping a scandal, and cheating something horribly wrong. It’s a living spirit at the Olympics while in the rest of the world cheating, stealing, killing are so widespread they’re just numbers in statistics to which we have become numbed.

In Venezuela, sports are politics not policy – consider, for instance, Formula One Venezuelan star Pastor Maldonado who keeps praising and thanking president Hugo Chávez at each press conference for all the money spent on him. Our young at universities and schools don’t have scholarships or logistical support for their studies when they’re good at sports. Exams or classes do not get rescheduled for competitions or training. And there are always problems: insecurity and crime around the venues, not enough infrastructure, “missing” resources, internal quarrels in federations, inefficiency and no serious implementation of any comprehensive policy. In Venezuela it takes a truly “Olympic” effort for any person to achieve excellence in any discipline because everything is stacked against them.

I don’t believe this is any different in any other underdeveloped or poor country plagued with corruption and over politicised.  It is the effort and will of the athletes what makes the dream of the Olympic Games so valuable and precious because it represents hope and faith in the best human values.

So do we really think about how evident inequalities, etc. are at the Olympic Games? Maybe others do. I personally don’t. I enjoy the idea that for one moment, after many years of hard work and sometimes against all the odds, the best athletes in the world have a shot at coming together and pursuing the same dream. And that they are competing in a place where politics are left aside and the ugliness of wars and conflicts is banished. Or at least that is what we dream of – a sort of utopia, the one we seek as a civilization. That is inspiring. And in a world so broken, so unfair, we need inspiration.