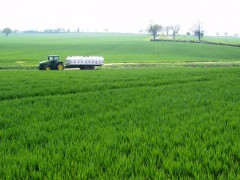 Biogas could be both a useful source of energy and fertilizer for rural South Africa. Picture courtesy of Graham Horn

Following China’s lead, plans to increase the use of biogas, or Anaerobic Digestion, in South Africa could help improve the country’s service delivery and serve as a local solution to the worldwide energy crisis caused by the depletion of fossil fuels.

Biogas is both a waste management system and a clean, efficient source of energy. The process involves the breakdown of organic waste in an oxygen-less environment. This produces methane gas which is an incredibly rich source of energy.

Furthermore, the natural by-product of the anaerobic digester is nutrient-rich slurry, a water-based fertilizer that, once re-introduced into the soil, helps to grow the very same food source that feeds an anaerobic digester. This slurry can also be further processed using algae tanks, simple reed bed filters or naturally occurring wetlands to reclaim the water used in the process. From this approach, South Africa can gain a waste management system that produces not only gas and valuable fertilizer but clean water, too.

The process of anaerobic digestion is carried out in a sealed container that, fed with water and organic waste, consistently generates enough methane-rich biogas to power gas stoves, lights, generators, and water geysers. The waste source fed into the container can be anything from food scraps to raw sewage to agricultural waste. In a developing country where so many people live below the poverty line without basic services, it is a way of creating efficient energy – and thus powering desperately needed basic services – from something that is otherwise unwanted and costs nothing.

Biogas has the capability to de-centralize energy production and effect change in the areas that need it most. At present in South Africa, numerous large scale waste digesters are being commissioned and built by the Cape Town based energy company AGAMA in otherwise removed rural areas. The Three Crowns School digester recently installed in the Eastern Cape by AGAMA, for example, has used sewage and garden waste from the school to power the school kitchens. The slurry is also filtered by algae ponds so that the water can be reused to water the school grounds and the algae itself to fertilize the school gardens.

It is worth noting, however, that for all the positives, biogas is not without its potential drawbacks or shortcomings.  If the quality of the digestate that it generates is not carefully controlled and monitored, it can have a detrimental effect on food crops when used as fertilizer. This threat cannot be underestimated when considering the reliance of many rural South African communities on agriculture and food crops both for personal consumption and for gaining income. Biogas’s efficacy also depends on the proximity of digesters to both their feedstock and the energy users. This remains a possible logistical hindrance to reaching some particularly cut-off communities that are “off-grid” precisely because of their geographical isolation and inaccessibility.

Nevertheless, the fact remains that as South Africa continues to develop, it is in the perfect position to reconsider its focus with regard to energy production. Fossil fuels are fading whilst other alternative technologies are less sustainable and involve inhibitive start-up costs and unjustifiable investments in infrastructure. Meanwhile, the basic needs of large regions of South Africa are not currently met by the electrical grid, resulting in excess use of kerosene, paraffin and wood-fire, all of which are in increasingly short supply and are harmful to the ozone layer. Biogas could fit many of the current needs of the country, revolutionizing pre-industrial natural cycles of waste and simultaneously producing valuable energy. But for biogas to really have a widespread impact in South Africa, someone is going to have to fill in a few potholes first.

Paul Mesarcik and Frank Petousis are members of Global21, a student-run network of international affairs magazines and a partner of FutureChallenges.