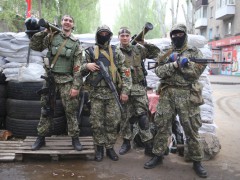 Separatist militants. As Putin called them “peaceful miners and tractorists”. (photo by tvc.ru)

On the 7th of April 2014 a mob of people occupied the regional council building in the Eastern Ukraine city of Donetsk and proclaimed independence as the Donetsk People Republic (DNR). At the time, most people looked at it like a joke, calling the new republic “Our Local Vatican”.

The same week, a Russian-created Wikipedia page about the DNR appeared, but it was deleted at Ukrainian edtors’ requests. Today the page of that non-existent state is almost the same length as Ukraine’s and translated into 52 languages.

The regional council building kept being occupied as a site for anti-Ukrainian rallies on and off throughout that March. As you can see from many YouTube videos, all that meetings were aggressive and loud, with speakers calling the crowd to violence. Look at the deputy of local Lugansk council Arsen Klinchayev. Brandishing his gun, he says: “No more talking! I am not going to talk with anybody. I will shoot right in the head! And I call you to arms”. Some of the more ecstatic separatist speakers were, Russian national and now-resigned leader of the separatists, Igor “Strelkov” Girkin and Aijo Beness, an Ugandan-Russian citizen of Latvia.

In 2005 Aijo was arrested as an organizer of an action against the visit of George W. Bush in Latvia. Later in 2013 Aijo participated in a congress of the political party The Other Russia in Moscow. In 2014 the Ugandan-Russian assisted Crimean separatists with state buildings occupation. He spoke Russian with a heavy accent, but made an impression as an international support of the DNR. More so, he said exactly what the locals wanted to hear: “All of Europe is in danger, because the coup d’état happened in Ukraine!” Aijo said, “The Euro-nazi junta of Yatsenyuk-Turchinov-Klichko usurped the power. As a US spy said the day before yesterday, the operation of seizure of power by russophobe forces had been planned in Washington for 20 years. The US government spent $5 billion to tear Ukraine away from Russia”.

But just words were not enough to create an independent state, so on April 12th Russian subversive Igor “Strelkov” Girkin led a group of militants and seized the executive committee building, the police department, and the Security Service of Ukraine offices in Sloviansk, a town in the Donetsk region. Girkin had plenty of Russian weaponry, but complained that he was not even able to recruit 1000 volunteers from the 4,5 millions residents of Donetsk, as he had to admit in the video address. Regardless, the freshly recruited separatists started arresting and, allegedly, shooting people unsympathetic to their cause. One of the now typical stories: Volodymyr Rybak, a government representative, was tortured by them. Separatists then disemboweled him and tied a knapsack full of sand on his back and drowned him in the river. Another horrible story is about eight protestant pastors which were tortured and killed by Russian separatists as “traitors to the Russian people”. “I tortured and beat our prisoners in the basement”, a pro-Russian militant admits in the video, made by the separatists themselves. Beatings of peaceful pro-Ukrainian meetings were not uncommon even before Strelkov’s coup. The ethnic-linguistic divide is also obvious with the attackers waving Russian flags. Soon after, the Kiev government sent in the military to pacify Donetsk and separatist militants opened fire, starting a war that has claimed more than 5000 lives, as UN news center claims.

“I pulled the trigger on the war which is still going on”, Girkin said later, “if our squad had not crossed the Ukrainian border, everything would have been over with only some scores of killed people”.

Separatists promised that the DNR and LNR (Lugansk People’s Republic) would be richer countries once free of “fascist” Ukrainian influence and the yoke of taxation. They also claimed independence is necessary as Ukrainian Right Sector militants were already gearing up for a march on the separatist regions, planning to kill all the Russian speakers. Lastly, the separatists spun propaganda about Europe and the USA and their plans to implement foreign systems of values and even establish a “homosexual dictatorship”. After a widely contested referendum in May the DNR and LNR declared independence. In August the Russian army invaded Ukraine to support the faltering separatists and the conflict turned hot and bloody.

But to what end? What is the D-LNR today?

The Lugansk region is divided today between Ukrainian government and separatist LNR control. 85% of the large industrial plants and 96% of the region’s coal production are under separatist control. And yet these plants lie empty. Their production capacity has substantially decreased and the GDP per capita of the region has fallen by 42%, as head of Economic development and trade of Lugansk region Andrey Skubak said. For a while, “Luganskteplovoz” (Lugansk Locomotives) and the Alchevsk metallurgical works were still operational, even under LNR control, employing people and contributing to the Ukrainian budget. They have since had to stop due lack of raw materials and a war-ravaged transport infrastructure. Now “Luganskteplovoz” produces macaroni and sells off its production facilities. “I would not use words “economics” and “industry” to picture situation in Lugansk, because we don’t have anything like that”, a PM of local council Andrey Nedoves wrote.

On March 31th, 2015 the LNR leaders organized a meeting with the Stakhanov railcar plant workers. The factory shut down 7 months ago, because of the war and legal uncertainty. Although the plant was “nationalized” by the LNR, separatist leaders claimed that the plant’s Ukrainian owners should bankroll the return to production. Separatist authorities are going to convert its facilities to produce baked goods and fortification walls on the LNR-Ukrainian border. It is the only way to ensure some employment for the plant workers.

Several plants were dismantled and ‘exported’ to Russia in a disturbing historical parallel. Lugansk machine works is one of them. “We produced mostly for Russian market, so decided to evacuate the plant in Russia”, the owner said, “To run our production lines again, we are going to hire local Russian workers”.

Hunger in Donetsk (photo by akcent.org.ua).

59731 private entrepreneurs and 10732 companies were registered in the Lugansk region before the conflict. Now, according to “taxes-and-duties committee” of the LNR, only 6500 registered businesses pay taxes to separatist budget.

The results are misery and hunger. Residents in the town of Torez recorded a video pleading for Russia to send food aid. “We are citizens of DNR starving with abundance of food on the market. Dear Russians, help us! We ask now. Only one American has answered so far…”

The promised prosperity never came to the separatist republics. Neither did Fascist massacres or the ‘homosexual dictatorship’ of Europe. After a bloody year the local industry is in shambles (or in Russia), citizens grow hungry and every man, woman and child in the region fears for their lives.

The only things that came to the D-LNR were imported Russian weapons in the hands of ‘imported’ Russian militants, militants that will likely make this bloody year just the first of many.