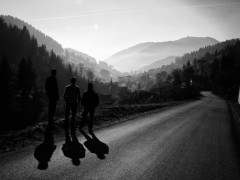 The problem of labor in Bosnia-Herzegovina (BiH) is less a problem of intergenerational competition than a problem of general unemployment and lack of opportunities for all. In Bosnia-Herzegovina, as in many countries around the world, villages are “aging.” This means that young people are leaving rural areas, which provide few opportunities for employment, to find work in the cities. Cities such as Sarajevo and Banja Luka are full of young people searching for ways to make a living and create a decent life for themselves, while villages sink deeper into economic depression and risk disappearing  completely. Those who do decide to stay in rural areas face no easier lives than those who decide to go as scarcity of jobs means that many young people both in cities and in rural areas will remain unemployed or underemployed – estimates say that unemployment in BiH today affects around 40% of the population. One result of this is the “brain drain,” the exodus of young talented people from our country who have no hope that they can realize their dreams here. While BiH has also seen the slow return of people after the war, and I myself have met a number of young, hopeful people who have returned determined to build a life here – far greater numbers are leaving. Meanwhile, the older generations in BiH also face high unemployment and poverty. Those who have pensions rarely find them enough to cover expenses, and many people, especially the elderly, rely on remittances sent by family members abroad.

There are many worrying things in this picture. From the perspective of the work I do in the field of justice and reconciliation, just one of the alarming results of these problems is that those very young people who could be using their talents to rebuild our post-war society are either apathetic because they have lost hope, or are leaving.  This has political, economic, and cultural repercussions. The lack of a fully functioning state due to a government structure which encourages political divisiveness, and politicians who use this structure to further their own selfish interests, means that these problems are largely going unaddressed, apart from the small steps taken here and there by NGOs and international projects.

Bosnia-Herzegovina is a country full of young, talented people. People who have dreams.  In the photo below, you can see three young men from the Vareš municipality in central Bosnia. Before the war in BiH, Vareš with its mining industry was one of the most developed municipalities in the country. Since the war, the industry has been in ruins. When I spoke with these three young men for a project I was working on, it became clear that these promising young people from Vareš do not have any hope whatsover of finding a job or a better future.

Because the problems of the past continue to structure the political reality of the present, many young people in BiH are denied the chance they deserve to build a life for themselves and make a meaningful impact on our society. There is no easy solution to this problem, especially since the problems are largely structural. However, what we can do is to make the stories of these young people known, and to use these stories to raise awareness, raise indignation, and demand change. We can also continue to build solidarity among young people of all religions and ethnicities in BiH, because in this way we are building a force of people who, together, might challenge the divisive politics which not only discourage reconciliation, but also keep the people of our country economically oppressed.