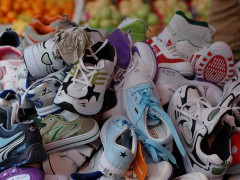 Shoes on sale in a Market in Quarry Bay, Hong Kong . Photo on Flickr by Joe Hastings. CC BY-SA 2.0

Free trade agreements can hardly be implemented without their share of tensions and accusations, and measures of protectionism and liberalization. And they are ambiguous: you can only judge them as “good” or “bad” when speaking from a particular place, from a particular side. The winner of today may well be the loser of tomorrow. In discussions about free trade, I believe it’s very important for the workers’ voices to be heard.

Last year, I had an eye-opening experience at the 18th National Congress of Clothing and Footwear Industry Workers. Workers from all parts of Brazil had travelled to Fortaleza to discuss better health conditions, gender relations, government policies, labor union structure and the international economic situation, with the aim of building a common work agenda.

I was responsible for summarizing the discussions and proposals of  the Thematic Group on labor union structure. At first they complained about younger workers’ lack of commitment, and then about a bill proposed in the National Congress to limit the right to strike. Then, later on, a man complained bitterly about the government which wasn’t doing enough to protect the national industry against cheaper manufactured products from China, especially shoes. And his comment caused sheer commotion in the room as workers rose up and demonized goods made in China in one voice. They fiercely rejected any prospects of a bilateral free trade agreement between China and the South American free trade zone Mercosur as they felt it would mean the end of their jobs.

Over the past 15 years, with the rise of China and other major economic changes, the national footwear industry has faced severe challenges and struggled to keep its productivity and competitiveness afloat.

According to the Brazilian Association of Footwear Industries (Abicalçados), from January to March 2013, national industries made profits of US$ 281,15 million in the export of 33.45 million pairs of shoes. Compared to 2012, profits dropped by 5% while the export volume increased by 700,000 pairs of shoes, in line with the strategy to lower the average price for a pair of shoes from US$ 9,04 to US$ 8,40.

The U.S., Argentina and France are the three largest buyers of shoes from Brazil, but the U.S. is increasingly turning to cheaper Chinese-made [pt] sneakers. Even Brazilian shops are doing it: 4,5 million pairs of shoes were imported from Vietnam, Indonesia and China in 2013. Abicalçados Brazilian Footwear is now trying to conquer a chunk of the Russian market.

In 2005, the newspaper Monitor Mercantil reported on [pt] the situation in the town of São João Batista, Santa Catarina state’s footwear industry hub. In that year, the sector employed 4,000 people while some 8,000 people had jobs indirectly connected to it. The city of Franca in São Paulo state, another hub of footwear production in Brazil, recorded higher exports in 2011 but 42% of local industries felt the direct impact [pt] of Chinese competition.

Figures for supply and demand released in June 2011 [pt] by the Brazilian Association of Footwear Industries (Abicalçados) showed that although the sector had expanded 10% in that year’s first quarter, imports grew by 40% in the same period. The Union of Footwear Industries of Minas Gerais state believes there is no competition between their products and Chinese ones: Brazilian prices may be higher, but so is Brazilian quality. In the same article an industry owner said that the Brazilian industry would compete better with changes in taxes, labor benefits and inflation that would allow it to lower prices and innovate more in terms of quality and design.

Changes in labor benefits to lower prices – now that’s a thought for industry owners to savor! But that’s not what the workers are looking for. The final statement of the 18th National Congress of Clothing and Footwear Industry Workers says that one of their goals [pt] is to mobilize the government to act on products imported at lower prices, which happens because “international competition is quite uneven with respect to decent working standards”.