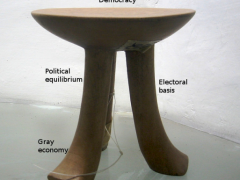 When Mohammed Bouazizi set himself on fire in the Tunisian city of Sidi Bouzid in December 2010, nobody expected what was going to happen afterwards. Several observers and experts attempted to draw a parallel between events in Tunisia and the dramatic changes that took place in eastern European countries after the Berlin Wall fell 20 years ago. This comparison was taken so seriously that Bulgarian government announced, after a meeting between the Bulgarian Minister of Foreign Affairs and his Tunisian interim counterpart, that Bulgaria was opening a special school to teach future Tunisian politicians how to succeed in democratic transition.

When I read about this in nearly all the Bulgarian newspapers, I thought it was some kind of bad joke. When Tunisians went down into the streets, they were protesting against corruption, despotism and joblessness. They were chanting for basic human rights, free speech, and an end to arbitrary repression.

What example could Bulgaria give in these matters after 20 years of democratic transition?

The EC report published in 2008 under the Cooperation and Verification Mechanism (CVM) qualified the situation in Bulgaria as “grave” and highlighted the inadequacy of measures the government was employing to fight corruption. The very last such report, published on July 20 this year, pointed out that while efforts have been made to fight corruption and improve the judiciary, doubts still persist about the how serious the government really is about implementing actual reform.

Democracy in Bulgaria: the non-existant stool with 2.17 legs. Image adapted by the author (CC-by-SA)

In 2009, the Washington-based watchdog Freedom House ranked Bulgaria 76th out of a total of 196 countries, and indicated erosion of freedom of the press and freedom of speech [1]. Moreover, a report from the Bulgarian Helsinki Committee (BHC) pointed out that – with the exception of children’s rights – basic human rights have been dramatically downgraded in 2010. This picturesque landscape is complimented by an “increase in the frequency of arbitrary use of special surveillance devices (SSD) by security services”, the BHC reports. The SSD Act and the Criminal Procedure Code do not provide sufficient safeguards against arbitrary surveillance and the secret monitoring of other forms of private communication.

Five centuries of Ottoman rule ended in 1878 with a liberating war and were followed by several decades of constitutional monarchy. Half-a-century of totalitarian “communism” came after which was another period of anything but a balanced political system. In 1989, Bulgaria was caught up in the events following the fall of the Berlin Wall: the end of the “communist” regime was above all the result of an external breakdown, not an internal uprising. The domino effect initiated in Central Europe eventually reached Bulgaria, of course, but it was the Communist Party that decided on the first changes. The “ex-communists” became socialists[2] eager to maintain their influence in the face of an aggressive opposition from the solid body of “anti-communists” making up the United Democratic Forces[3] who wanted to take over all the levers of power in the name of democracy. This binary division has resulted in a mafia-like “gray” economy – an inexhaustible source of fraudulent enrichment.

The Constitution (adopted in July 1991) and this rudimentary two party system are clear indicators of the tremendous difficulties involved in building a sane electoral baseline and highlighted the fact that we were simply not ready to make this famous transition to democracy. And this political set is here to stay: the constitution of the parliament such as it is after the most recent elections in 2009 (see figure below) clearly shows the 2 poles (center-left with BSP and the Turkish minority movement[4] vs. all the others ranging from center-right to far-right[5]).

The make-up of Bulgarian Parliament since 2009. Image by the author (CC-by-SA)

Nor do things look any better, economically speaking. Bulgaria is the poorest country in the EU. Even though the average salary is said to be  300€/month, the minimal salary remains ridiculously low (270 levs ~ 135€/month) and there are major disparities between the country’s regions. People have not forgotten the huge unemployment rate (18%) less than 10 years ago nor the galloping inflation (550% in 1997). In 2010, 10.2% of the population were unemployed, and the introduction of the euro to the country was postponed to 2015. Recently, the “gray economy” was estimated to make up as much as 40% of GDP. But I guess, we can always assure Tunisians that it is much better to have a “gray economy” than no economy at all, as the Bulgarian Minister of Finances and Transport Traycho Traychev put it a few months ago…

Against such a shabby and uncertain background, I honestly ask myself what kind of “How-To-Do Democracy” handbook Bulgarians can write for Tunisians. The infamous “Bulgarian umbrella” and our flourishing “gray economy” seem to be the only high-profile goods we can export…

[1] The report assigns a numerical ranking to each country based on legal, political, and economic factors; it considers regulations that restrict media content, editorial pressure by the government, intimidation of journalists, and the structure of media ownership.

[2] The socialists gather in the Bulgarian Socialist Party (BSP).

[5] The current majority party GERB is classified as center-right; Ataka is the far-right movement, and all the other parties are in between these two.

Photo credits: Stool is originally by mrflip (licensed under CC-by-SA 2.0)