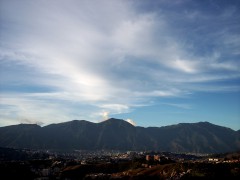 A view of the Ávila from the South of Caracas. Photo taken by the author.

On the site worldviewcities.org, the teaser about Caracas says “Think Blade Runner in the tropics“. This might give you a sense of the chaos, the light and the darkness, and the contrasts of Caracas, capital of Venezuela, and my own home city. It’s difficult to talk about Caracas because more often than not we Caraquenians have a love/hate relationship with the city. As residents we know its chaos, light and darkness all too well.

We love the mountain that reigns over it, El Ávila, recently renamed after its indigenous name Warairarepano. We think is the city’s guardian and protector. It is our totem. We turn to look at it in awe every day, to observe its ever-changing colours as the day progresses, and to seek relief from the overwhelming frustration of traffic jams. It has been a source of inspiration for many artists and poets ever since the city was founded. We love the valley that enfolds Caracas, the wind in the afternoon that takes away the pollution from the air, the ready wit of the city’s inhabitants, and the constant surprises that the city’s synergies and dynamic landscapes spring on us.

We hate the traffic, the violence of crime that has taken over, the overpopulation, the dehumanization that urban chaos brings with it, the physical degeneration of the city spurred on by political polarization which makes any attemp to improve Caracas an issue of interminable discussions that always forget the priority of the greater good, and lead to no positive action whatsoever, just mere cosmetic measures.

Caracas is not an easy city. Mostly developed under unfinished and failed plans, modernity tried to take it over through the hand of the dictator Marcos Pérez Jiménez in the 1950s who wished to complete the old Rotival plan from the short lived democracy of the 40’s. Remarkable architects and planners tried to make the city one of the more modern on the continent. The highways, avenues and parks, the country’s Central University, the hospitals, and  other important landmarks of the city all date back to those times.

With the advent of democracy, after a period of struggle against the guerrillas in the 60’s, came the nationalization of the oil industry, industrialization and electrification of the whole country in the 1970s. Modernisation also brought waves of inmigration from poorer neighbouring countries and inner rural provinces which made Caracas grow explosively fast in the absence of any proper urban regulations. Squatters took over the mountains, crevices and water streams of the valley to build their “barrios” (favelas), while planning developers attempted to organise parts of the city with little success as with widespread corruption big buildings, shopping malls etc. were not so legally erected, housing zones were turned into commercial or industrial areas, and protected green areas were used for residential purposes. This sort of uncontrolled growth created synergies and particular dynamics between Caraquenians and Caracas dividing the city into East and West, not only geographically but socially speaking as well:  the upper classes live in the East while the lower orders populate the West. This division has been accentuated by the political polarization which has occured ever since the Chávez “revolution” of 1999.

But however debatable the democratic character of this 13 year old political process might be, no Caraquenian has any doubt that the violence is democratic, because it affects all of us, or that the traffic congestion, the delays on the subway, and the lack of open spaces like parks and squares are all the egalitarian circumstances of this city. It is not a city to be lived, just a city to live in.

Expropriation (without compensation) of land, buildings, semi-finished constructions for displaced people or institutions suddenly appearing in places they are not meant to be all put a big question mark of uncertainty over construction developers and any plans that could serve the city. Such expropriations are meant to push forward the “revolution” and thus cannot be contested nor is any discussion permitted by which some consensus might be reached on their impact on the urban landscape. This only gives the city a sense of emergency and of precariousness that is always spiced by the threat of political confrontation.

At this point in time it is almost impossible to talk about any plausible alternatives or changes, not until the confrontational parties reach a degree of political maturity, put aside their pseudo-ideological quarrels and make common cause about what is needed to make Caracas a city to be more loved than hated. We remain hopeful, however, because we are cradled in this valley of sorrows and happiness by the sight of our big mountain that comforts us no matter what.

http://cav.org.ve/ site of the Association of Architects of Venezuela (Spanish)

The skyscraper slums of Caracas