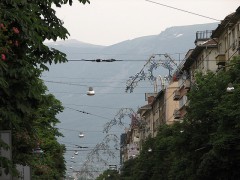 Peter, his wife and their two small children are a middle class family who own a two-bedroom apartment in a central location in Varna, Bulgaria’s third largest city. They have two cars and go on vacation twice a year. Peter has a degree in economics and used to work for the Ministry of Interior, but quit a year ago because the salary he received “was not worth the effort to get up in the morning.“ His wife has never worked in her life. But they don’t complain as they have everything they need to lead a decent life. In terms of Bulgarian standards, they are a relatively well-to-do family who openly admit that they owe all they have to the monthly financial tranfers they receive from abroad.

According to recent studies, the minimum amount of money needed to support a family with two children in Bulgaria is roughly EURO 1,100. If both parents are employed in full-time work, and at least one of them works in the private sector, this should not be beyond their reach.

At the same time, such a standard is can also be attained if neither of the parents is working – provided they receive monthly financial aid from relatives working abroad. In Peter’s case, his mother-in-law, who has worked in Greece as a babysitter for more than ten years now, is the person who virtually pays for everything that the family purchases, eats, drinks and wears.

Migrant remittances are a powerful source of aid to many Bulgarians who find it hard to make ends meet on their own. According to the World Bank’s 2009 statistics cited in the media, Bulgaria is among the countries with the highest proportion of its population working abroad (1.2 million or 16 percent) and one of Europe’s biggest recipients of remittances. Since the Bulgarian Central Bank started collecting data about migrant remittances in 2004, the amount of money sent home from abroad has steadily been increasing, despite the global downturn which has also had its fair share of negative influence on the country’s economy. In the last years, “migrant money“ has been the second largest source of finance in the country after foreign direct investment (which is declining).

As data from the Bulgarian Central Bank show, last year remittances to Bulgaria amounted to EURO ﻿﻿﻿﻿759.6 million. This amount tends to increase constantly – it totalled EURO 473 million just for the first seven months of 2011. And according to Sofia’s News Agency, the actual money sent back home is much higher than the official figures say.

So what do these figures tell us?

On the one hand, the direct positive influence of this influx of finance undoubtedly results in the immediate improvement of the well-being of many families who have no other way to survive in the EU’s poorest member state. The increase of cash backs expands people’s spending capacities and is an indirect investment back into the Bulgarian economy.

On the other hand, for many people receiving ready to be spent cash gives them little or no incentive to actively look for a job and earn their own livelihoods. Many of the recipients of remittances are young people who rely heavily on their parents’ financial support, which means that if for any reason the money transfers stop flowing, these young, unemployed and often unqualified people will be left with no income, and – even worse – with little ability to find a job and integrate in the local employment market. In the case of Peter’s family the question nobody dares ask is what will happen to them when his mother-in-law is no longer in a position to support them.

So the answer to the question whether remittances are really a well-balanced boost for local economies is two-edged. In a country like Bulgaria, whose unemployment figures show little grounds for optimism, they really do present a viable temporary solution. But from a global perspective, however, this solution must be handled with the utmost care.