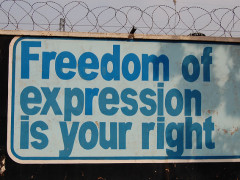 “Anything that threatens our freedom of expression takes away our human dignity.” Sedat Ergin, a Turkish Journalist, said upon winning the Freedom of speech award.

These voices at the forum stirred my mind to reflect on the freedom of expression online in Uganda and those that are fighting to defend these freedoms.

Freedom of expression is your right (Rachel Hinman, via flickr.com, CC BY 2.0)

The Internet is home for most Ugandans that spend more than eight hours online a day: for work, news, information, business or to catch up with friends and trends.

According to the Uganda Communications Commission, there are over 12 million Internet Users in Uganda. Two million of those use social media as an alternative tool.

Even though two million users looks like an insignificant number out of the 34 million Ugandans, there is a ripple effect of social media that trickles down to the population in rural areas through community radios to those that are not using social media yet.

Yet, this social media presence has presented itself as an enemy to those in government. There are increased actions by the government to clampdown on rights and fundamental freedoms on the Internet, almost at will. In 2016 alone, the Uganda Communications commission has shut down social media twice; during the 2016 general elections and swearing in ceremony of the president, for “security reasons” claiming that the platforms were spreading propaganda.

“Disabling social media platforms is being used to subvert democratic process and respect of rights by intentionally disrupting or blocking access to or dissemination of information on the Internet. Shutdowns allow rights violations to occur in the dark with impunity”, says Anthony Masake, a Programe Assistant at Chapter Four Uganda.

The government of Uganda boasts of how they are investing in ICTs to increase competitiveness, yet they fight it when it works against them. When social media was switched off during the swearing in ceremony, the government of Uganda continued to use Twitter and Facebook to make announcements. They were using VPNs just like the rest of Ugandans.

Chapter Four Uganda must be applauded for defending online freedoms. They have provided rapid legal response in strategic cases to several prisoners of conscience after their arrests because of expressions made online. They have been instrumental in complementing online activism that had for sometime been ignored as mere “slacktivism”.

Notably, Chapter Four Uganda continues to provide legal representation to Robert Shaka. Shaka was arrested on June 8, 2015 by a group of about 10 security operatives and charged with the offense of ‘offensive communication’ contrary to section 25 of the Computer Misuse Act. He was accused of allegedly posting offensive posts on Facebook about President Yoweri Museveni’s health condition under an alias ‘Tom Voltaire Okwalinga’ (TVO). Despite the police actions to defeat a court order for unconditional release of Shaka after detention beyond the constitutionally provided 48 hours, the organisation secured his bail a few days later in court. To challenge the impugned section to stop related charges under section 25 of the Computer Misuse Act, Chapter Four Uganda has filed a petition in the Constitutional court to challenge the section.

The more a government stays in power, the more they seek to explore approaches to silence dissent.  The supression may take the form of government trolls, intimidations, harassment, arrests, shutdowns, surveillance, and possibly introduction of a law to control online engagements. With this, the work of defenders of freedom of expression in Uganda will be needed.