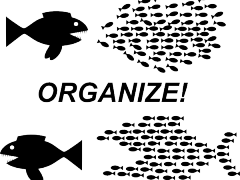 I have been mulling over how to frame my thoughts about the ‘relationship trouble’ between the people and the institutions that govern them. On FutureChallenges, Corina Murafa phrased a very interesting perspective; I, however, disagree with her main proposition: “governments, be they local, regional or national, are no better than their constituencies.”

I believe many out there have read Jacques Rousseau’s “The Social Contract”, either during the seemingly never-ending philosophy classes at high school or on some whimsical Sunday afternoon later on. In this foundation work, Rousseau firmly rejects a (not only at that time) pervasive idea that people can invest some group or individual with the authority to act on their behalf and rule over them. Instead, Rousseau considers that when you hand over your general rule to another person or entity, this constitutes a kind of slavery. More importantly, the mere fact of recognizing this authority is an abdication of moral agency. Such a surrender is even more striking when  you consider the hostility with which Rousseau approaches the election of representatives to sovereign assemblies: these vote and pass laws that bind citizens to terms and obligations the citizens themselves have not agreed upon.

Now, this is no scoop: many people have come to think that such an infantilizing political system needs to be challenged and reconstructed. Take the #Occupy movements, the so-called ‘Arab Spring’, 15M, #IdleNoMore, the huge protests that have erupted even in a country as apathetic as Bulgaria… But I don’t want to get into an analysis of popular movements here: I’d much prefer to talk about a more ‘2.0 version’ of a Rousseau-inspired fight against the abdication of moral agency. Let’s talk about Open Government initiatives.

The Open Government Partnership program crystallizes the need expressed by citizens to reduce the distance between themselves and their governments. The program, a project of the Tides Foundation, “embraces principles of transparency and open government with a view toward achieving greater prosperity, well-being, and human dignity in our own countries and in an increasingly interconnected world.” The Open Government Partnership was formally launched on September 20, 2011 after the eight founding governments (Brazil, Indonesia, Mexico, Norway, Philippines, South Africa, United Kingdom, United States) endorsed an Open Government Declaration. Since then, the program has welcomed the commitment of 47 further governments.

For a country to be eligible, it needs to commit itself to sharing and implementing the main principles of open government: transparency, citizen involvement, accountability and technological innovation. For many East European countries, this translates into a laundry list of challenges such as improving public services, increasing public integrity, creating safer communities and increasing corporate accountability. A set of criteria defines what commitments a government willing to join the Program needs to fulfill. These commitments are measured by objective indicators and validated by independent experts.

Several East European initiatives have sprung up: Bulgaria, Macedonia and Romania have all joined the OpenGov project. Other countries from the region such as Bosnia, the Czech Republic and Slovenia have also started to promote the concept of openness. Not surprisingly, one particular focus is on opening up the country’s budgets and governmental expenditure as rampant corruption has corroded social relationships in any of these countries for decades now. In other words, the point is building trust – that fleeting, nearly forgotten feeling in a region where memories of the former Soviet Union’s iron fist are still vivid and lively.

Not only is ‘public expenditure’ a black hole into which people’s money disappears, it is also a black box as the people are kept in complete ignorance of the transactions. This is a sore spot, given a foreground of deficient medical care and general impoverishment against a backdrop of megalomania and pervasive oligarchy. The case of media is a textbook example of how the ‘fourth estate’ – journalists – are bound to governing instances.

Not surprisingly either, governments are not always keen to ease the process of opening the data: if you have ever attempted to get your hands on a dataset to explore, you have probably encountered its most obnoxious format, the PDF. Officials often become wildly creative in providing you with data as an image of a table that was in a PDF that is actually a copy of a third-hand fax. You really have to love riddles to get rid of a natural aversion to smudged and unclear letters …

Rousseau reloaded: getting back our sovereignty

Even though the big issue of how to ensure the sustainability of open governance in each of the countries and within the region still remains, the opening up of government data continues. Officials from public institutions might want to play the incapable of understanding what the benefits of open data are, but the trend towards open governance is surely irreversible. What makes it so is the amazingly encouraging number of volunteer citizens massed behind these efforts. When you see, for instance, the amount of easily processable data from Bulgaria, and think that a major part of it was gathered and curated collectively by citizens, you realize that the shift from ‘demanding accountability from elected representatives’ to ‘co-governance’ is readily visible.

Corina wrote that “governments, be they local, regional or national, are no better than their constituencies.” Even though we can make mistakes and power-greedy individuals still bring corrupt, more and more citizens do take governance issues seriously and actively engage in breaking open the black box. How then could they be as bad as what they fight against?