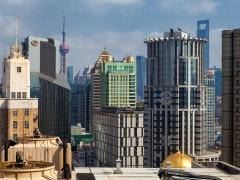 A citizen and his State. This relationship is at the forefront of discussion as the welfare state tests its limits and migration patterns become increasingly metropolitan.

Thanks in particular to Millennials, urban migration seems beyond inevitable. Yet this growing trend rarely factors into our larger debates about government’s role in its citizens lives.

In the United States, Thomas Jefferson’s once ideal agrarian society has fled for the skylines. In 2010, over 80 percent of Americans lived in urban areas. Defined as communities of over 50,000, urban areas are growing and the big are getting bigger, expanding at a faster rate than the country’s population at large.

Globally, half of us live in a city. By 2050, over three quarters will, according to the UN. As younger generations increasingly prefer city living for economic opportunity and a cosmopolitan lifestyle, we should be analyzing the impact and influence of our city halls more thoroughly. As urban migration increases, the welfare state will increasingly be defined by city-level governance.

Municipalities take the lowest percentage of American’s taxes yet still have the most daily impact on citizen’s lives.

Thanks to recent notable examples, city executives have become increasingly influential politicians. Occupying the lowest rung of the traditional three-step ladder (local, state and national) has not stopped mayors from exercising influence. Rather, their power is following their burgeoning constituency. More people centering in urban areas also creates power centers.

Mayor Michael Bloomberg of New York City is often said to occupy the second-most powerful office in the United States. Now in his third term, the political independent has perfected displaying his power.

He’s made headlines waging a regulation war against 16-ounce sodas in New York. He now hopes to make America’s largest city the first to ban cigarette displays in stores. The billionaire has extended his political clout nation-wide with an ad blitz encouraging increased gun regulation.

Bloomberg’s actions, even the politics of regulating soda, are heard worldwide. City executives like Bloomberg have turned their growing constituencies into political laboratories.

Mayors Against Illegal Guns is sponsoring events across the country to bring attention to gun regulation and attempt to force Congress and President Obama’s hand on the issue. Mayors’ activism, begun at the municipal level, has created more action where larger national governments appear to move slowly.

With increasing tax bases and populations, municipal governments will continue to become centers of political innovation. To comprehend the future of the welfare state, citizens must better understand city government. As more people move to metro areas, elected government and its bureaucracy will increasingly be centered at the city level. The relatively smaller size of city government allows agility in localized, swift political change. Not to mention banning 16-ounce sodas cross-country would be a tougher sell.

How will power shift as dollars, votes, business, nearly everything centers in large urban areas? Here in my home state of Wisconsin, the mayor of our largest city earns an income of $147,336 while the governor makes $10,000 less despite a much larger constituency.  Considering increased power and population in urban areas, this won’t seem backward after long.

People are moving to the cities. In democracies, power will follow.

Are such patterns of human migration indicative of increasingly communal outlooks on living? In different terms, did the rise of the welfare state promote future generations to live more socially and closely?

It’s a matter of debate whether the migration trends or attitudes toward government change first. Regardless, certain realities are changing quickly.

We can read the future now. Look to what Millennials are doing. Many of us are headed to urban areas. That trend, likely to grow rather than diminish, has unanswered ramifications for the future of the citizen and her state. Well, city.