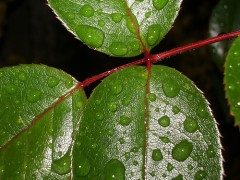 The Colombian government needs to step up to the plate and tackle the challenges brought by climate change. Not only because it has a responsibility to its citizens who are facing rougher and rougher rainy seasons with every passing year, but also because of the responsibility it holds as guardian of part of the Amazon basin to the rest of the planet and its future generations.

Still not back on its feet after the 2010 La Niña and the 2011 flooding and landslides that caused a state of national emergency, Colombia is now facing yet another rainy season which is already wetter and deadlier than the previous ones. As one of the country’s congressman said, the rain caught the government with its pants down.

As I sat reading the Sunday newspaper it was raining. It has been raining most every day this past week, and probably will continue unabated until December 15th, according to the Colombian Institute of Hydrology, Meteorology and Environmental Studies (IDEAM). Sadly, it is the poorest people who suffer most. A three page story in the paper entitled “Winter Wave” talks about the damage such back-to-back rainy seasons have wrought on the general population.

In the Atlantic region of Colombia one year ago people were evacuated as their homes and farms flooded when the levees broke. Some people have slowly returned to their homes, poorer than they ever were, to try and rebuild their lives, but schools are still closed and food is scarce. There is no water, no electricity and for many, no future. According to the Colombiano newspaper, in the town of Santa Lucia, the popularly elected mayor doesn’t even live there anymore, having decided to move to the city of Barranquilla instead. And now, the people who last year lost everything when they were evacuated from their homes are facing the rains once again.

The government insists that it is doing its best but at the same time admits that its best may simply not be good enough. Funds allocated by the Humanitarian Colombia program are only meant to cover risk mitigation and rehabilitation, not rebuilding. Bureaucracy has caused delays in getting the money to the people and the organizations in charge of infrastructure rebuilding work, yet nature didn’t wait for the works to be completed before unleashing the rains once more: 94% of the rehabilitation work funded by Humanitarian Colombia was still being completed when La Niña arrived with its downpours. And when the rain came, it also brought with it a flood of paperwork as government agencies are simply not prepared to deal with the extra work involved with national emergencies in addition to dealing with fund management complaints.

How can a country like Colombia be better prepared to face climate change and protect its citizens from the damaging effects? The danger is not something intangible to be felt only in the distant future; climate change is being felt by people now all over the country, and most keenly of all by those who depend on the weather for their sustenance. Flooding is just one of the dangers. This past week landslides killed several people in the department of Antioquia, roads have collapsed and had to be closed causing millions of dollars in losses. With the rains, crops are also lost and people who depend on them for their living also lose their jobs. So not only is there no food to put on the table for many, neither is there any income to buy more.

Colombia may not be a new democracy, but it is definitely facing some of the challenges exposed in Democracy’s Green Challenge: particularly with regard to how its leaders deal with climate politics on a national level. So far, the nation’s president, Juan Manuel Santos, has refused to declare a national emergency, despite stronger rains than in any of the previous seasons. As senator Carlos Baena points out, during this week the president has been absent from the country – yet his leadership is vital: according to Baena he is the only one capable of forcing all ministries and relevant authorities to face up to the effects of La Niña.

Yet facing climate change is not just about damage control and disaster prevention. It also has to do with educating the population not to cut down valuable forests next to water sources, with teaching farmers appropriate land husbandry and having people in urban settings dispose of trash in the correct manner and doing their bit to reduce consumption and recycle more. However, all this will only work if both the private individual and the large corporations and multinationals are made responsible for their actions.

Colombia also has a great responsibility towards the world at large, since its policies for nature conservancy will affect the Amazon River basin which provides 20% of the world’s fresh water. Roughly 40% of Colombia’s territory is considered part of the Amazon Region, and yet it has been precisely these areas in the Amazon that have been the ones most neglected by the government, the same areas where for years now the guerrillas have hidden from the authorities. Indigenous communities constantly struggle to uphold their land rights against large mining corporations, loggers and farming outfits that cut down the forest in exchange for single crop cultivation that will deplete the land.

And while this goes on in the forest, in the cities and towns we struggle with the more pedestrian hassles of flooded streets, setting out pots and pans to catch water leaking from overworked roofs, and watching the hillsides surrounding our homes change day by day as the saturated earth gives way and drops several meters, leaving jagged red scars on the grassy slopes.