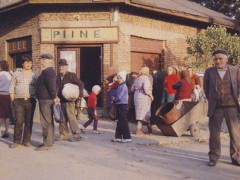 Nostalgia over communism is on the rise in Eastern Europe. So are public protests. Are these symptoms of Easterners “lost in globalization”? Most probably they are just so much living proof that post-socialist regimes have failed to provide a social safety net for their most vulnerable citizens. What’s more, governance as practiced by current politicians is perceived in much of Eastern Europe – and more often than not rightfully so – as being fraught with corruption and a lack of transparency.

Wintertime is revolution time in Eastern Europe. All socialist regimes fell in the winter of 1989, with people defying the bitter frost and taking to the streets in order to trump their rulers. In my homeland Romania we now commemorate the victims of our bloody revolution every December. This is the time of year when talking heads on chat shows pontificate about communism and political analysts in the papers dissect our thorny transition to democracy while the rest of us light candles in memory of the deceased. Figures from a recent opinion poll on Romanians’ views on communism and the transition period show that almost half of them (44.7%) believe that communism was something positive for Romania while about the same percentage believe people lived better lives under the old regime.

The mood of the people is not too different in the rest of the Eastern bloc. In Slovakia, 66% of the people say they lived better under communism than they do now. In Russia, the percentage of nostalgics hovers around 48% while in Hungary it’s around 62%.

When it comes to daily realities in Romania, certain spheres of life are infinitely better today than they used to be before 89. First and foremost comes the realm of personal freedoms, especially for the middle class and educated Romanians. Freedom replaced totalitarianism and for many of us, myself included, it’s a priceless gift that our parents fought for dearly and sometimes even paid for with their lives. At the same time, Romania’s transformation from a closed to an open economy has paved the road for economic opportunities and personal choices. Previously in the run-up to Christmas, our parents’ main worry was where to find even the tiniest piece of meat for the Christmas dinner. Or they would stand in line for days on end just to buy an ugly doll for their children (only one model was available, let’s be clear). The shelves of the few supermarkets were mostly empty save for cans of beans and tomato paste. Food was rationalized, too. Nowadays though our main concern around the holiday season is whether the fast post will arrive on time with the present we’ve bought from one of the glittering galaxy of online shops. And there’s a well stocked supermarket every couple of hundred meter where tens of different types of sugar and oil and cheese compete in price and quality.

In contrast, shops nowadays are stuffed with products, competing in terms of price and quality. Photo by Joel Abroad, for Flickr, CC BY-NC-SA 2.0

Even so, the social safety net is still deteriorating day by day, and many people fondly regret the social services they used to get under communism. The sanitation services might have been as foul as the education we received but they were free and the state made sure that every citizen received them. Literacy rates skyrocketed as a forced alphabetization program reached every little village in the country with the aim of turning peasants into productive factory workers and ultimately into the New Men that socialism was breeding. The same happened with basic sanitation services. Unemployment was non-existent (though jobs and working conditions were miserable) with the state control of the economy and its policy of forced industrialization. The widespread perception that the “state offers us everything” has endured.

With the rise of capitalism, the failure to create the conditions needed for inclusive growth has left swathes of the population in a highly precarious condition – particularly the elderly, the Roma, and the rural population. 8% of Romanian children live in severe poverty on around 3 EUR per day (Souce: UNICEF Survey). Other statistics show that 2 out of 5 Romanians live in conditions which are unacceptable to the social norms of a European society (i.e. their disposable incomes are under 60% of the average national disposable income). In the countryside, subsistence agriculture on land that was returned to the peasants after having been confiscated for 50 years by the communist regime is leaving many in dire living conditions. This year, the National Institute for Statistics confirmed that the threshold for relative poverty in Romania is situated around the minimum wage. In other words, those who earn the minimum wage (and there are many who don’t, like the unemployed, pensioners, and those living on welfare support) are automatically considered poor.

All in all, while a considerable segment of the population has reaped tremendous benefits from globalization and the breakdown of communism, the most vulnerable segments of society have been left behind. Taking note of this, the Economist Intelligence Unit says that the risk of social unrest in South Eastern Europe in 2014 has risen to an all-time high.