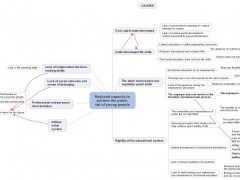 I would like to have written about the consequences of the global intergenerational competition. However, this dilemma does not apply (yet) in Moldova which has only a small number of workers who could join the global competition for jobs and measure up to the educational and professional requirements of the race.

In Moldova young people complain about the lack of jobs while around 15.7% of local small and medium enterprises complain about the shortage of trained skilled young workers (see: BEEP, Survey on Business Environment and Enterprises Performance, 2009). In 2011, the unemployment rate was 6.7% or 84,000 people as against an active population of 1,257,500. Here the highest unemployment rate is among young persons. Unemployed persons aged between 15-24 years account for 14.9% while those in the 25-34 age group account for 9.1%. Percentages in the other age groups are relatively low (Source: Statistica.md)

What are the causes for this? A draft of the Problem Tree would look something like this:

In short, on the one hand the education system does not yet properly prepare young people to cope with face fast-changing demands on the labor market. This is called the “knowledge gap”. The formal education system is rigid and provide neither the flexibility and mobility needed by early entrants on the labor market, nor any career guidance for students. Nor has it established a framework for non-formal education where practical and real abilities are nurtured.

On the other hand, the labour market does not absorb those skills and abilities young people already have. Employers are reluctant to provide internships for students, because they are not aware of the benefits of non-formal education. The employment process is often not transparent and not based on real competences, but rather on “networks” and relationships.

Such realities discourage people and lead to a lack of faith in their future prospects, migration and the brain drain. According to the National Statistical Bureau, the majority of young people who leave the country to work abroad are highly educated.

What shall we do? Two alternative present themselves:

1. Do nothing – which is not acceptable given the nefarious consequences inaction would have for the economy of Moldova.

In one interview, the recently appointed minister of education said that the situation in the education system is worse than she imagined.

1. Objective: to improve the education system

1.1. Actions: school optimization, ensure that every child in the country has access to schooling; improve teacher training; introduce a performance-based system; and (most importantly) combat corruption.

2. Objective: connect the labor market with the business sector.

2.1 Actions: implement career counseling so as to ensure that only a small share of graduates do not follow careers in the fields they have studied.

2.2 Increase awareness of non-formal education among employers in order to increase demand for skilled workers with real abilities.

2.3 Introduce new concepts such as creativity and innovation: the “Creative Moldova”.

“Creative Moldova” is an issue I would like to expand on a bit and talk about why creativity and innovation are as important as structural changes.

According to the  Global Creativity Index the fundamental elements that drive economic development are the 3Ts – technology, talent and tolerance.

So, the higher the creativity index, the faster economic prosperity increases. Sweden comes out on top of this index, followed by Japan, Denmark, Finland, Norway and Singapore.

So let’s compare Sweden with Moldova.

In terms of culture consumption, Moldovans spend significantly less time and money and show much less interest in theatres, museums, concerts and personal cultural development than Swedes. While public expenditure on education per pupil as a percentage of per capita GDP is higher in Moldova, the results are considerably worse. In 2011, Moldova spent 9% of GDP on education, while the relative amount spent in the EU is 4-5% (Source: Eurostat)

Data below refers to the factors that form talent and tolerance.

The graph above clearly shows why Sweden is the leader in this league table: its scientific research institutions are of outstanding quality, universities cooperate with industry, and people are employed in knowledge-intensive industries.

How did this happen? Was it a focus on creativity, a focus on non-formal education or just intense collaboration between the market and the labour force? The answer is that most likely all these measures helped develop this outcome.

Sweden should certainly serve as an example for Moldova to follow, embracing the creative approach, ensuring linkage between the workforce and the market, creating demand for highly skilled professionals and encouraging studies as the pathway to a high-quality life.

I believe that when the prime minister said our focus should be “education, education, education”, he meant that we should strive to improve the performance of students not by increasing the public spending per student, but by striving to raise the general quality of teaching and the quality of studies.