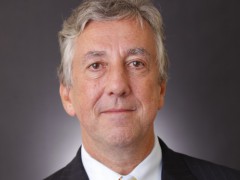 When Robert A. Johnson founded the Institute for New Economic Thinking, he wanted to make sure the old axioms, what he calls “tribal customs,” were ripped open.

His boldness seems to be working. Compared to the countless other acronyms present, the Institute’s work dominated several sessions and impromptu snack table conversation at the Global Economic Symposium in Kiel.

But he represents one bridge to whatever comes next in the finance world. Or at least he’s trying. He talks about the faulty logic of economists insisting they can predict the future. He’s got an army of Millennials on his side working as Young Scholars across the world. And if there’s one possible way to predict the future, it’s talking to the next generation, specifically in emerging economies.

At the GES, when session topics were dominated by the Euro crisis, Johnson was sure to mention what others do not: religious-cultural influences in economic systems, the younger generation, the immense power in the East that dwarfs a fractured Europe.  It’s all part of his broad view of the field of money, which includes psychology, history, and God.

These areas of research touch on economic factors including youth, society, and the new future – all pushing the Institute to better know emerging economies, such as China.

The sleeping dragon has been on the Institute’s radar as it looks to the future of economics.

“What is the Chinese dream? It’s an analog to the American dream,” Johnson said.

He describes the young and rising Chinese middle class as creating a Chinese dream, figuring out through economics what drives societal aspirations, whether happiness or financial security.

As part of a different way of pursuing economic study, he has invested time in understanding such aspirations.

The Institute’s work to expand economic thinking beyond the boundaries of the West is clear from its agenda, including a youth conference in Hong Kong highlighting Millennials.

Johnson’s foundation was mentioned more than any other organization during the GES, save perhaps the dysfunctional U.S. Congress. It’s clear the Institute for New Economic Thinking will be a major player in the future of economics, both from its research focus and from its increasing fame in economic circles. The Institute has found an opportune time to grow amidst general disdain for the old economic way.

The discussion at GES, while enlightening, was indeed just talk. Little was agreed upon, and I left with the sense of leaving a college class: my brain scrambling to remember the facts and ideas I was exposed to but fully aware nothing had changed outside of a few perspectives.

But unlike the Global Economic Symposium, a meeting of big thoughts and talk holed up in the north of Europe, the Institute seems poised to take participants’ ideas and connect them with a larger network around the world.

Perhaps that’s Johnson’s function: the ultimate connector, creating mechanisms for cross cultural understanding and economic cooperation. The implementation part is up to Millennials soon to lead our changing economic systems.