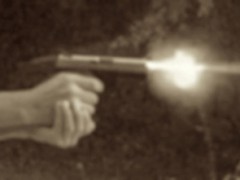 In October 2012, the Canadian journal La Presse published “Sans son arme, un Américain se croit en danger au Canada”, a peculiar story about an American policeman and his wife who vacationed in Canada but complained about the strong Canadian restrictions on carrying weapons. The sarcastically written article told the story of the American tourists’ feeling insecure because of two “suspicious” young men that approached them in a park. It was determined afterwards that the men’s intention was to give them free tickets for a festival.

Even though the Canadian Journal published the article with the sole idea of making some fun of the American insecurity complex, if we dig deeper in the implications of such a case, we might find ourselves facing a perfect example of how the aggressive aspects of culture reinforced by the increasing processes of transnationalism tend to be a determinant of conflict.

During the preparations for publishing the content package “War and Peace”, an American wrote a personal account about how war is natural for human beings, particularly through daily reminders of friends who have gone to war to defend their country.

Kira Kariakin from Venezuela responded to the American’s statement by suggesting that “most Americans” have variations of personal stories about impacts of war. I echo Kira’s remarks in that war experiences do indeed play an important role in the mentality of most countries and regions. However, war cannot be assumed to be a natural rule. As the Canadian story or, for instance the Mexican case could exemplify, peacefulness may be an effect of local character combined with power capabilities.

Mexico has only declared war once in its history and it was a mere symbol of alliance during the Second World War; sending its 201 Squadron composed by 25 airplanes, 30 pilots, and at most 300 personnel. Once I met a family member of a war veteran, and, as she emphasized, the pilot hated to speak about the war and he never wrote his memories; today, the only memorial from his service is a small collection of medals hanging from the wall.

Historically, Mexican conflicts have been defensive or small, local movements. In fact, whenever there has been international conflict, Mexico has voted at the UN in favor of negotiation instead of fighting.

Perhaps the biggest Mexican issue that pertains to this content package is the “War on Drugs”. While normally war is intended to hurt an opponent, thus imposing one’s decision or dominance over a certain issue or physical asset. In Mexico, however, this war is nothing more than a senseless internal fight on poverty.

First of all, considering that the only solution to the “War on Drugs” would be centered on social development and state-society coordination rather that on a ferocious fighting strategy, we could say it is not a “war” on itself.

Second, if we analyze the deep causes of the drug conflict we would find huge levels of inequality rather than a natural need for aggression or the imposition of power. The aggressive drug cartels invite young poor people to earn lots of money on a forbidden market with an enormous foreign demand. Naturally, even at the expenses of their own lives they will normally follow the famous principle of: “Es mejor vivir 10 años como rey, que 100 años como buey”(It is better to live 10 years as a king, than 100 years as an idiot).

It was during former American president George W. Bush’s term that bilateral action began between the USA and Mexico, and the “Merida Initiative” was signed between both countries. With this agreement, both parts would reform and supervise their security agencies, and the USA would invest each year 1.4 billion dollars on equipment, training, and technical assistance for improving the operation of justice in Mexico.

This policy was adopted into effect for some years and, after more than 116,000 deaths, both governments have noticed the price of their mistakes and the impossibility of stepping back. Today, there are still no effective alternatives to the problem and no substantial reforms on the Merida Initiative, a strategy that contemplated equipment and security but left out the most important factors: social development, institutional cooperation, and lowering the drug demand that mostly comes from the USA.

In addition, lots of the weapons used by the drug cartels come across the northern border, and, as we may see on the movie “Bowling for Columbine” produced by Michael Moore, there is still no intention to control the weaponry sold in the USA. In the end, drugs cross the border in direction to the American consumers and in return weapons are sent to Mexico, encouraging the continuation of the conflict with both transactions.

The moral of this story is that, even though a small certain degree of conflict may be natural for any society, aggressive aspects implicit in cultures along with the clash created by increasing interdependence of states as a matter of globalization, tend to induce the creation of violence all around the world. Problems tend to move from requiring local solutions to requiring multilateral action.

Then, without the intention of blaming anyone for the creation of conflict, and carefully trying not to insult or criticize any particular culture, (the examples were chosen because of personal experience, but there may be many other different ones to talk about such as the German weaponry exportation to the Middle East) the real objective of my article is to exhort common reflection over how to create a gradual change on the aggressive tendencies of our cultures.

It is a personal duty to find our cultural strengths and weaknesses to exploit the positive aspects and diminish the negative ones. For example, Mexico would be really glad to import some of the entrepreneurial and innovative spirit of the USA instead of weapons.

Why was the American policeman afraid of the two Canadian young men? What did he really need his gun for? An appropriate response to the interaction would have been: “Great, thanks for the tickets!”

Picture taken by Mauricio Guzmán during his family trip in the USA.