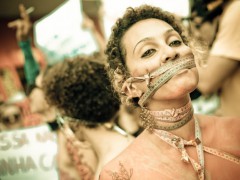 A woman protests about continuing repression against women in a Slutwalk in Belo Horizonte, 2012.Photo by Casa Fora do Eixo Minas on Flickr.CC BY-SA 2.0

Back in the late 70s in Brazil,  there was little women could do about open prejudice. Not even the law did much for them. There were absurd moves like the one to annul mariages if the man discovered his bride was not a virgin. Recently, newspaper columnist Miriam Leitão wrote about the difficulties she faced trying to register her newborn son without her husband who had been arrested under the dictatorship. The registrar said she could be a liar, and not even an attorney could help, only with her husband by her side could she register her child. Such procedures are no longer common practice in big cities but they are still pretty widespread in many backward areas of Brazil where they mostly affect poor uneducated women.

Since those times plenty of initiatives for gender equality have sprung up. Yet the goal of true gender equality is still far away. Not only have they failed to change general perceptions about women, they have also failed to reach all women. Incidents of various kinds of sexual harassment are not the exception but the norm in our world of much admired macho values.

The Federal Special Agency for Women’s Assistance (SPM/PR) was created in 2003 with the status of a federal ministry. The establishment of this agency marks the beginning of efforts towards a systematic approach to the development, articulation and coordination of all the scattered initiatives for combating sexist prejudice in Brazil. For the last 10 years the agency has been working together with other government agencies, NGOs and civil society in general to promote development of a broader network of support measures for women. This protective structure includes specific courts, clusters of public defenders and psycho-social/legal assistance, women’s shelters, specialized police agencies, and an exclusive law (called Lei Maria da Penha, 2006), among other measures.

Yet despite all the worthy efforts to give special assistance to women at risk, it’s still difficult for them to lodge a simple complaint. For instance, in Ceará – one of the poorest states of Brazil –  only  very few allegations of aggression against women results in a police investigation. In 2012, according to the Police Agency for Protection for Women, only 12.5% of reports of assault on women were investigated by the police.

Reporting sexual violence involves women in a host of issues ranging from guilt (also in relation to the children), legal expenses, and loss of their homes to isolation and disruption of family relationships. And poverty only exacerbates such situations, leaving already resourceless women to seek the help of inadequate overburdened support networks to help care for her children and eventually with even more difficulties in ensuring a livelihood for themselves and their families.

Most poor women live in “no-go” areas of ongoing violence and are terrorized not only by criminals but by the state police apparatus. Even worse, they are not just oppressed by the repressive state structure, they also bear the brunt of poor quality government services throughout their lives. These are women who have studied for a few short years in an substandard public education system; who wait for hours on end for help in medical emergencies; who are unfamiliar with preventive medicine; who are not able to choose who they married or when they want to have kids. They do not choose what to do with their lives, they just survive with what life does to them.

Variations in women’s level of satisfaction with their gender condition according income and level of education. Data Released by Fundação Abramo

Naturally, these women do not trust this same apparatus to guarantee their safety when they file complaints. They have generally lost their faith in the ability of state institutions to make any real difference.

A recent event in the current wave of protests illustrates how sexist attitudes are still very much alive when one female student was arrested for “contempt of authority” because she reacted to a policeman who called her “hot”. This is the very synthesis of the clash between expansion of citizenship rights and maintenance of archaic behaviors.

Sexist habits in Brazil are so ingrained they have become institutionalized. This officer could not see the inappropriateness of his comment, neither as a good citizen nor as a uniformed policeman in the service of the people. Catcalls are another widespread sympton of sexist habits, offensive and annoying but not serious enough for action. Juliana Cunha has an excellent discussion of what they are and the way they work in her last post on Catcalls and the Right to the City.

To make effective change and fully achieve the objective of equality between men and woman, the law is not the only thing that needs to be updated and better enforced. Preventive and educational measures are one important starting point to empower women as men`s equals and allow them to fully exercise their own and their children’s citizenship. These could promote awareness of the harmful consequences of sexism which could start to bring about a permanent reorientation in people’s beliefs and habits. Because ultimately, expanded social consciousness is the only effective protection.