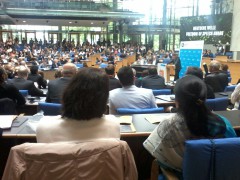 The 2016 DW Global Media Forum ended on June 15. One statement that will always remain fresh in my mind was made by Peter Limbourg, the DW Director General; ““The end of the freedom of expression is also the beginning of the end of democracy.” He said this while opening this year’s global media forum under the theme: Media. Freedom. Values.

Indeed freedom of the press is the cornerstone of a democratic society. But in the developing world where democracy is still weak, the media and journalists are often under constant attack from authoritarian rulers and their cronies. Journalists have been assaulted or even killed while doing their work. However, in Uganda, some journalists are not taking the beating, from the state and its agents, without raising their voice.

The Human Rights Network for Journalists in Uganda (HRNJ-Uganda) has done a commendable job of highlighting the plight of journalists in Uganda. Many journalists have found refuge in this not-for-profit organisation. HRNJ-Uganda has supported several journalists who have been assaulted, imprisoned, and targeted in the course of their work. The support includes finding legal aid and pressing the media owners to put safety of their reporters at the forefront.

Established in 2005 by journalists who reported about human rights, HRNJ-Uganda has ensured that attacks on freedom of the press and journalists are highlighted and kept in the limelight so that the perpetrators are brought to book.

HRNJ-Uganda is well known in the Uganda journalists’ circles. The journalists have used the platform provided by HRNJ-Uganda to expose the poor working conditions within their media houses as the not-for-profit organisation engages with media employers to treat their workers fairly.

Apart from HRNJ-Uganda there are other organisations like Unwanted Witness which use different media tools to amplify voices of the poor and vulnerable groups and add an active voice to initiatives that work towards demanding and promoting democratic governance. Some of the activities of Unwanted Witness include training “freelance writers and journalists to improve quality of their works and have bargaining powers for their products (stories) to build an independent and sustainable occupation in the East African region.” Hopefully all these effects will help us build a free press and leave us with a better informed community.

I think freedom of the press begins right from the newsrooms, where journalists should be able to air out their views without fear or favour and ensuring that they work in a conducive work environment.
As Peter Limbourg put it “Each one of us is called upon, to stand up and demand the freedom of expression” just like the HRNJ-Uganda is doing.