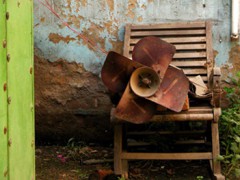 A discarded fan used by the guards of a residential locality in South Delhi, India.

An ancient city, Delhi is one of the largest metropolises in the world. It’s home to over 15 million people, a refuge for people from Tibet and Myanmar, an economic opportunity for those from Nepal and Bangladesh and the biggest magnet for migrants from across the whole country.

India’s capital city owes its existence to the River Yamuna that has seen more than half-a-dozen cities rise and die on its banks. Delhi’s topography is interesting as it is sandwiched between two important natural resources – the Yamuna and the world’s oldest mountain chain, the Aravalis. Sadly, both of these natural magnets for people are now dying due to governmental indifference.

A historical building in the midst of dense foliage in Delhi. The city is a beautiful blend of heritage structures and green areas.

Looked at from another angle, the Aravalis could easily have been a UNESCO World Heritage Site if only the government had bothered to lobby for its inclusion in the prestigious list of protected sites. What has actually happened is that the trees in the million-year-old Aravalis have been cut down to make way for  for land while its hills have been depleted for stone.

On the eastern flank of the city lies the Yamuna that has been damned to provide water for the city. Of the approximately 48 kms of the river’s course through Delhi, 22 kms bear the brunt of 19 drains emptying their industrial and sewage effluvia, making this small stretch the most polluted in the river’s entire course of 1,380 kms. Despite various agencies pumping in vast amounts of money to clean up the river, the Yamuna remains dirty as ever.

American alternative musician Terra Naomi sings on the bank of river Yamuna in Delhi, India, as part of a concert to raise awareness on climate change.

When London hosts the Olympics this year, the Thames will be the venue for many water sports. But when India hosted the Commonwealth Games in Delhi in 2010, we did not know what to do with the river – whether to hide it or show it. Even the view-cutters that were put up across the city to hide the supposedly not-so-pretty spots could not cut out the view to the river.

Despite these failings, even now Delhi remains one of the greenest capitals in the world. City forests, historical greens, lakes, parks, gardens and nurseries have endowed the city with unparalleled natural wealth.

A morning walker in the Nehru Park in Delhi’s diplomatic enclave. The city’s green spots are mostly located in South Delhi and Central Delhi.

Through positive legislation and an army of green-lovers, who keep making themselves heard, large swathes of city green areas have been protected. Yet threats are still ever present with builders ever-eager to gobble up protected land for malls, hotels, institutional areas or roads. And often enough it’s the civic authorities  themselves who suggest chopping down the city’s natural forests to create manicured parks and gardens!

No wonder then that environmentalist and artist Ravi Agarwal, director of Toxics Link makes this startling statement: “The city’s green areas have to be protected from the State itself!” He explains: “Over the last few decades, we have been able to save the green areas from people. But it is becoming increasingly difficult to save these spaces from the government – because it can change designated land use or amend the master plans. Government agencies always want the land for something.”

The 700-year-old Hauz Khas lake (above) in Delhi was revived with some ingenuity but slippages in maintenance are frequent. It was a model that could have usefully been adopted for wastewater management but due to slippages of various kinds, the lake often gets fed with non-recycled sewage water and it stinks.

Just recently, a plan by the Delhi government to convert one of the forest areas on the periphery of the city into a landfill site was turned down by the courts. Such ‘bright’ ideas – and not just the ever rising needs of the people -pose constant challenges to the conservation and maintenance of Delhi’s natural spaces.

This drain in East Delhi lies choked with solid waste proving that not all is well with waste management practices in the city.

Activism too has changed colour. As Bharati Chaturvedi, director of NGO Chintan, says: “Now people think that by clicking on Facebook they have done their bit for the environment. Facebook activism does not help where real issues are concerned.”

Agarwal agrees. “The irony of modern day life is that people know much more about nature but feel much less about it.”

All photographs by the author.