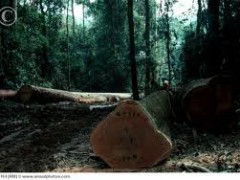 We can only determine if democracy has been a guarantee for sound environmental policies and better ecological management if we look at the way democratically-run countries have treated the issue of climate change and deforestation in their own smaller frameworks. They present viable case studies outside a binding global consensus.

Côte d’Ivoire is a case in point. Under the watch of a democratic dispensation, large corporations and farmers with sizeable holdings have decimated significant tracts of rain forest and caused the world’s fastest deforestation crisis. The country has just recovered from the protracted civil and post-electoral violence that cost the lives of many of its citizens. Located in a West African corridor with abundant rainfall, the nation laid claim to about 16 million hectares of lush, naturally existing rain forests before independence from the French in 1960. After independence, Côte d’Ivoire had the most extensive rain forests in West Africa and a stable democracy right up to 1993 when President Houphouet-Boigny – then the only post-independence president to be repeatedly elected in democratic elections – died in office.

More than 40% of the world’s cocoa is grown in the country which also ranks as the third largest producer of coffee. Agriculture accounts for much of the economy’s growth and many jobs in the country are linked to this thriving industry. To make this possible, much of the natural forest has been progressively sacrificed and turned into arable land.

Yet it was at the height of its democracy that the county lost most of its vegetation. Côte d’Ivoire’s economic dependence on agriculture has led to the exploitation of the country’s natural resources in times of economic hardship. For example, during the 1980s the commodity prices for cocoa and coffee collapsed worldwide and Côte d’Ivoire responded by increasing exports of wood products to make up for the loss in agricultural revenue. Consequently, in the early 1990s the country recorded a historic deforestation rate of nearly 6% per year while the rest of the world had a deforestation rate of under one percent.

An ambiguous land tenure system, a major problem of many African countries, has also encouraged farmers to abandon spent land and clear additional forest. All this happened under the watchful oversight and legislation of a relatively stable democracy. As of 2006, a little less than 10 million hectares of forest remained. And the civil war only worsened matters.

In other places around the world, different forms of governance have done better at managing green resources. Monarchies and even sometimes, dictatorships have been able to increase their overall engagement with green technology. In fact China, a socialist dictatorship, is the current world leader in green technology. So the question remains whether the method of governance affects a people’s response to ecology. It turns out, however, that this is more an issue of policy than of governance. The two countries mentioned here explain it well. Paradoxically, since 1990, three years before Côte d’Ivoire suffered its first coup from which a true democracy is only now emerging, only 1.8% of forest cover has been lost.

National consciousness is being built in all countries signatory to the Kyoto Protocol. Climate change mitigation is a multi-national responsibility rather than a single country’s do-it-all. With the right policies and leadership, it does not matter whether it is democracies that lead the way or not. As China shows us, leadership can come from anywhere.