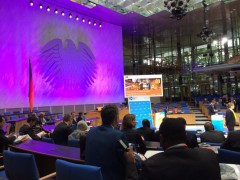 Exactly one month after suffering a lumbar disc herniation I seriously hesitated when receiving Deutsche Welle’s invitation to travel all the way to Germany for the Global Media Forum (GMF) 2015. Today, after surviving two 13 hour flights and back home in Mexico I certainly believe it was a great choice, the effort was definitely worth the experience.

During the Deutsche Welle GMF, representatives from several different countries gathered to share ideas about “Media and Foreign Policy in the Digital Age” throughout vast intercultural dialogue. For five days, a group formed by activists, journalists, government officials and others engaged in a series of workshops and discussions on topics related to the impact of information technologies (IT) on media dynamics, global decision-making processes, protection of human rights and development.

In the beginning of the event located at the Bonn Conference Center´s main room, two features captured the public’s attention: a huge and imposing metal Eagle next to a German flag on the back of the stage, and the fun seating rail system that allowed the chairs to slice back and forth, back and forth and back and forth. A certainly elegant enclosure with glass everywhere, organized as a semicircle to welcome the participants and promote a horizontal dialogue.

Bonn Conference Center during the first minutes of the DW GMF 2015, photo taken by author

The first climax of the event was during the official countdown for launching DW’s English TV channel. Besides the spectacular presentation where a big red button was pressed and the first moments of transmission were broadcasted worldwide, this initiative made clear Germany’s interest in sharing its culture and quality media abroad, something every journalist present certainly applauded. A great start for inaugurating Germany’s #DW_GMF trending topic that lasted for a couple of days.

Around 40 different workshops combined with three plenary sessions encouraged people from several diverse cultures to participate, able to compare and contrast situations between different regions. It was a great opportunity to witness a parade of global discussion, dancing to the rhythm of languages I didn’t even know existed before.

Within this solitary ecosystem everything went out perfectly for a rather emotional moment that unleashed the public´s enthusiasm, the Bobs Awards. Deutsche Welle’s price for recognizing online activist projects that promote free expression, ideas sharing and human rights via the Internet.

Rafida Bonya Ahmed won the Social Change Award for Bonya’s Blog and a mysterious young man under his scarf and a hoody won the Arts and Media Award impersonating the main character from his videogame Zaytoun the little Refugee. Worldwide known Saudi Arabian blogger Raif Badawi, unjustly sentenced to 10 years in prison in May 2014 for promoting liberal ideas and criticizing Islam was recognized with the Freedom of Speech Award, followed by a message from his wife asking the international community not to forget about her husband.

Last but not least, I feel obliged to confess that I was really proud when I found out a fellow Mexican had been granted with the other Bobs Award for the Privacy and Security category with Rancho Electrónico. A very interesting project I would like to see more widely shared in my country, which consists of an open and independent community that shares knowledge and ideas for developing diverse projects, creating a space for interaction between hackers, hacktivists and free software

These successful stories must certainly be recognized as examples of courageous people following their ideals and fighting for our rights, while encouraging others to follow their path. Nevertheless, what’s even more important is to remember that their projects were possible only because we are living in a digital era in which we have access to numerous benefits previous generations couldn’t afford.

Fixed and mobile connectivity, smartphones and social media, among other devices and connectivity services have helped to democratize knowledge and ideas worldwide, to communicate instantly from one corner of the world to the opposite and empathize with communities far away. For the first time citizens from diverse backgrounds can actively influence local and foreign policy, while being able to collectively impulse change from wherever they are and at any moment.

Precisely this type of active and dynamic person who has taken advantage of IT tools to generate an impact on society is what Deutsche Welle recognized as a “Local Hero” during the GMF 2015. A change maker with social awareness whose story is worth spreading and voice worth listening to.