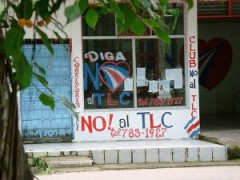 It was early evening on Maundy Thursday. I was in San José, Costa Rica, visiting a friend, and we and a small group of  her friends had just come back from a trip to the mountains. Since it was a holiday in a Catholic state, we had a really hard time finding an open bar.  No one should have to drive around several towns for over three hours trying to find a bar that’s open. It’s inhuman.

But we hit lucky and found ourselves sitting in a bar that’s over a hundred years old. “Chelles” is located right in downtown San José and it’s a mythical iconic place. Now two of the people in our party, Rodrigo and Paula, both in their early thirties, were flirting and got to the part where you exchange phone numbers. And the conversation went something like this:

Rodrigo: —Alright, so my cell phone number is 6…

Paula: —DUDE, YOU’RE GIVING ME A MOVISTAR NUMBER! ARE YOU SERIOUS? I’m ICE. Get yourself together.

I left San Jose before I got to know if they really did hitch up, but Paula’s heated reaction to something as trivial as a telephone number – which seemed hilarious to me as a foreignor – was not only well grounded, but closely related to the DR-CAFTA (Dominican Republic-Central America Free Trade Agreement) and what’s now left of what used to be the social state of Costa Rica.

ICE, which in Spanish stands for the Costa Rican Institute of Electricity, is Paula’s phone company. Created in 1949, it belongs to the state and it used to be the sole provider of both electricity and telecommunications for 97% of the population at the lowest rates in Latin America. Movistar, Rodrigo’s carrier,  is a Spanish mobile phone operator that got its current share of the Costa Rican market only after CAFTA became effective on January 1, 2009. In Paula’s eyes, then, the fact that Rodrigo was a Movistar client meant not only that he was on the wrong side of the policital spectrum, but that he was on the side that was anti-Costa Rica.

Out of all of DR-CAFTA members, Costa Rica is the one that needed it the least. Before 2000, Costa Rica had one of the lowest levels of poverty in Latin America. 65% of its territory is composed of protected natural areas, and during the fifties Costa Rica built a social state that, among other things, ensured that ICE would use part of its income to subsidize rural telephone services and internet services in public schools.

Costa Rica was able to build a social state despite its being part of a really conflict-ridden region: the Central American isthmus. The country was even able to resist the sole attempt at foreign intervention when in 1970 different social movements came together to kick the ALCOA aluminum company out of the country. The ALCOA revolts also helped establish the enviromental movement as the strongest civil organization in Costa Rica. While its neighbors were being torn apart by civil wars, Costa Rica was able to build a solid democracy. It was not nearly as worried as the rest of the region when DR-CAFTA was proposed. For Costa Rica, CAFTA meant privatization of public services and severe damage to the small farmers’ economy. CAFTA implied modification of labor and commercial law and thus meant the end of the social state. So it was very clear to the majority of the population that the only valid answer to CAFTA was “no”.

DR-CAFTA was approved by the US Congress and signed by president Bush in 2005, yes, but it needed to be ratified by each CAFTA member. And this was no easy ride.

No other DR-CAFTA country put up such a fierce fight against ratification as Costa Rica. CAFTA ratification depended on a referendum (the first in Costa Rican history) which some say split the country in two. Various demonstrations were held. TV spots were aired. Massive rallies were held. Local businesses came out in open opposition.

On October 3, 2007, the “yes’s” won by a 3% margin. Costa Rica’s levels of poverty have actually increased since then, but recent changes in census’ methodology (link in Spanish) make it hard to prove that the rise in the unemployment rate from 6% in 2007 to 10.2%  in 2012 is related to DR-CAFTA-derived policies. Nowadays, ICE shares the mobile phone market with at least three other companies. And prices have increased.

However, those who opposed DR-CAFTA are determined to support ICE by keeping their cell phone contract with them. Paula has had the same phone number for over 13 years, since cell phones first became affordable in Central America. All of her friends are ICE customers as well and have political and apparently moral reasons to stand by ICE. To them, keeping their business with a state-owned service means supporting Costa Rica. That’s why she reacted so heatedly when Rodrigo started giving her his Movistar phone number: in her eyes, he’s not standing up for his country.

My host in Costa Rica and I share many points of view, and during my stay we only shopped at family-owned small or medium-sized businesses. I did not see one phone booth that was not operated by ICE, and while San José is now full of American fast-food restaurants, we only stopped at one of them for coffee.For Costa Ricans who opposed DR-CAFTA, then, its ratification meant that consumer habits that used to be the norm now took on a whole new political dimension. My host and her friends, including Paula, share those habits, while Rodrigo didn’t. And that may have cost him a date with a really pretty girl.