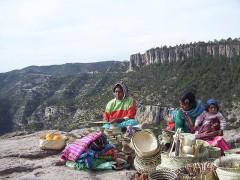 This past January, Mexico suffered one of the most alarming droughts in 80 years. The country is now experiencing water shortages trends, resulting in less food harvested due to the lack of access to water for irrigation.

The drought has affected mainly the north part of the country –the states of Durango, Chihuahua, Coahuila, San Luis Potosí and Zacatecas– where the economy relies strongly on agricultural activity. One of the most affected areas is north of the Sierra Madre in the state of Chihuahua, home to the indigenous Tarahumara community.

The Tarahumara people are known for subsistence farming and a culture of self-sufficiency. Their reliance on nature for sustenance makes this community particularly vulnerable to the drought. This season’s harvest of staple goods such as beans and corn had very low yields due to the lack of water. Since farming is this community’s only source of income, the people lack employment opportunities to make money for purchasing necessities from other regions.  As a result, famine is sweeping across the region.

The government and several NGOs, including the Mexican Red Cross (MRC), have joined efforts to bring humanitarian aid to this region of the country. The MRC has begun sending packages of staple goods to the region, but the main difficulty is the inaccessibility of the region due to its location across the Sierra Madre, one of the largest and rockiest mountain chains in the country. “A cargo bus will not fit,” said Isaac Oxenhaut, a national aid coordinator for the Mexican Red Cross. “You have to do it with four-wheel drives or donkeys, or the people who take (the packages) on their backs.” The packages of aid contain canned goods, diapers, beans, rice, and other commodities needed for survival. Also, the MRC launched a campaign throughout the country to collect clothes and blankets to fight the cold winter in the region. In sum, the Red Cross gathered 274 tons of food and 10,000 clothes for cold protection for 42 communities in the region.

The federal government through the CONAGUA (National Commission of Water) is also taking action to provide relief to Mexicans suffering from drought. As of January 2012, CONAGUA reported to have spent nearly 60 million pesos to support the Tarahumara men and women. Part of the government’s relief efforts is to provide temporary employment to the Tarahumara whose farming suffered significantly from the drought. Employment may include cleaning of the existing water bodies, channel and ditches dredging and building of dams. CONAGUA is also inspecting Mexico’s water systems to ensure water provision even during times of drought.  It is recognized that much of Mexico’s water systems are inefficient due to leakages, and that infrastructure improvements must be made to prevent droughts from having such serious impacts on Mexico’s people in the future.

Although the problem is far from being solved, the efforts of the Mexican community to help those in need are being noticed. But there is, still, a long way to go to help the Tarahumara to reestablish their old way of life, independent from outside assistance.

Fernanda Carrillo is a member of Global21‘s The Tec Globalist, a student network of international affairs magazines and a partner of FutureChallenges.