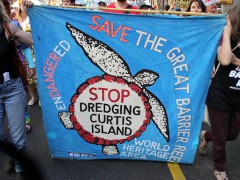 In Australia, there’s a bird called the ‘kookaburra‘ and when you hear it call, it sounds like it’s laughing. When you walk near it, it sounds like it’s laughing at you. Australia is full of wonderful flora and fauna that make it a true natural paradise. Indeed this region of the world has been explored fervently as a veritable treasure trove by botanists, scientists and adventurers. In this age, humans are dealing with a view of the environment that not only endangers the “treasure trove” but pushes it towards the brink of collapse.

Australia’s Federal Minister for the Environment, Greg Hunt, recently announced that the biggest coal port in the world has been approved for development along the coast of the Great Barrier Reef, a World Heritage listed site. This project will see the dredging of spoil dumped 40 kilometres off the coast. This will have devastating impacts on the reef, as The Guardian says, “To give you an idea of the scale of this dredging, if all of the spoil was put into dump trucks, there would be 150,000 of them lined up bumper to bumper from Brisbane to Melbourne.” The Sydney Morning Herald noted that “The World Heritage Committee has also been alarmed by increasing development on the reef’s coast – with a number of major resource projects approved in recent years – and will consider in 2014 whether it should be placed on an ”in danger” list of world heritage sites.”

Protest to Save the Great Barrier Reef from coal projects, by powerofgreatbarrierreef, on Flickr, CC BY 2.0

The reef is a remarkable and natural asset that fuels the tourism industry in Australia; is the centre of ecological biodiversity and is a great source of pride for many Australians.

The decision by the Minister places the reef at further risk of damage, even though the Australian government has already received warnings from UNESCO about the alarming level of resource and development activity in the area. With rising sea temperatures and ocean acidification, the future of the Great Barrier Reef looks very grim indeed.

The push for energy security in emerging economies with rapidly growing populations, such as China, is fuelling this rampant reckless push for natural gas. And it has devastating environmental consequences for the non-human species on our planet. Economic globalisation has provided many opportunities and benefits for some members of the human community but the same cannot be said for our non-human species. Our ecosystem is flailing and suffering under the strain of years of rapid industrialisation.

Yet with sublime indifference to the warnings from UNESCO, environmentalist groups and ecologists, the Australian government has  begun the obliteration of one of the seven natural wonders of the world.

What we urgently need is a new approach to decision-making on development approvals. Not the “business as usual” approach that prioritises economic development at all costs over social and environmental concerns, but an earth-centred approach. The Australian Earth Laws Alliance is an advocate for major systemic changes in our legal system, prioritising an earth-centred approach to law and governance. It aims to “promote the understanding and practical implementation of Earth Jurisprudence. Earth Jurisprudence is a new legal theory and growing social movement…it proposes that we rethink our legal, political, economic and governance systems so that they support, rather than undermine, the integrity and health of the Earth.”

The Australian Earth Laws Alliance is a member of the Global Alliance for the Rights of Nature, and partner organisations exist in many countries including the United States, Ecuador, the UK, India and New Zealand. Many of these organisations advocate recognition of the ‘rights of nature’. This is the idea that all life and all of the earth’s ecosystems have a right to exist, thrive and evolve.  Based on the work of deep ecologist Thomas Berry, acknowledgement that nature has rights is a way for industrialised societies to rectify the current imbalance in our governance and decision-making systems. Embedding the rights of nature in our governance systems places the natural world on a more equal footing with the rights of humankind.  At present our political and legal systems support human development at all costs, but this is no longer sustainable. If our Minister for the Environment subscribed to the idea that nature has rights, he would have made a very different decision with regards to the dredging at Abbott Point.  In fact, had the rights of nature been considered, many projects in Australia that are currently threatening our world-class national parks and tourist attractions, including the Tarkine National Park, would have gone a very different way.

For decades now, ecology and other fields in the natural sciences have shown us that all life is interconnected, and if we destroy the natural world, we are destroying ourselves.  It’s time for our political, economic and legal systems to reflect this understanding and create human governance systems that nurture, rather than destroy, the ecosystems on which we depend. A recent article in the Epoch Times further supports the assertion that the earth is a living and breathing entity, in many ways, assuming its own economy.

I wrote to Michelle Maloney, the National Convenor of the Australian Earth Laws Alliance and asked her what an earth centred approach would mean for global governance. This is what she says:

What kind of impact would an earth-centred approach have on economic globalisation?

It would create small scale economies for most transactions, reduce or remove the power of transnational corporations and place greater control over local eco-systems with local people; create energy systems based on renewable energy, ensure greater levels of citizen control over democratic processes and generally a healthier, natural world.

What benefits would humanity enjoy as a result of economic and political decisions that incorporate “the rights of nature?”

Humans would benefit from healthier environmental conditions, greater connection to the natural world and greater peace of mind/soulful happiness, because we’d know we were working hard to nurture the Earth community.

As we come to a new year on this planet, humanity needs to heed the calls and warnings from the epicentre of our natural environment and take action. Nature may not be able to communicate with us in our spoken languages, however it is communicating with us in a different way, spelling out to us that our current economic models are forcing non-human species to become lost in economic globalisation. For our own sakes as well, we need to heed this call.

There are also ways for the global community to support the Great Barrier Reef, please click here to help.