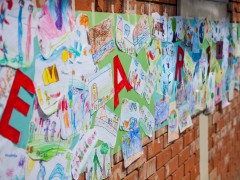 On Monday, April 23 (one day after Earth Day), U.S. Embassy officials visited the Islamabad International School to commemorate Earth Day. The students and diplomats planted trees and enjoyed a presentation by first and second-graders.

Tagline: Market based mechanisms at work in Pakistan despite its subscribing to the Kyoto Protocol

A very pertinent question was raised in the Earth Day article – which was whether market-based mechanisms or policy-based solutions are best suited to control the environmental hazards caused by rapid unchecked industrialization. In 2010 the British multinational oil and gas company BP’s Deepwater Horizon oil rig exploded far under the sea. The subsequent oil spill and its after effects have eluded control up to the present day. In January 2011 the White House Commission on the BP Deepwater Horizon oil spill released its final report on the causes of the oil spill which blamed BP and its partners for making a series of cost-cutting decisions and for the lack of a system to ensure proper well safety. Apart from the 11 people who were killed on the spot, it has also caused dolphins and whales to die at twice the normal rate while mutated crabs and fish continue to born entailing both a loss of fishing and tourism as well as depletion of a valuable food source. In a nutshell, its effects are double-edged causing degradation of the environment and also impinging seriously on local economies and human health.

The BP Deepwater Horizon disaster could also serve as an example in terms of what has been done to repair the damage or rehabilitate the affected environment. What is evident here is a lack of proper government intervention, and a lack of safety policies. Social corporate responsibility – as a result of the market-based mechanism –  is also minimum as no long-term sustainable and wide-scale solutions have been observed commensurate with the magnitude and long-term effects of the damage.

The general situation of the environment in Pakistan is unhealthy in terms of water, air and land management. This is likewise the result of the market-based mechanism where regulation of rules goes unchecked and there is almost no government intervention to enforce protection of the environment. It is ironic to note that although Pakistan subscribes to the Kyoto Protocol, it does not maintain the standards to protect the environment defined by the Protocol.

WWF (Pakistan) notes that most industries start out without any proper waste control planning which means that their waste is mainly just dumped into nearby canals and rivers. Excessive use of chemical fertilisers and pesticides promotes the flow of contaminated agricultural water. Alarmingly, this pollutes the surface drains as well as the lower layers of soil as water trickles down and causes contamination of the natural aquifer or body of saturated rock through which water can easily move. Another problem is contamination of water lines due to leakage from sewerage pipes. Lack of implementation of policies on water management also gives rise to water pollution while emissions of exhaust fumes from cars and other vehicles continues to pollute the air. Sadly, the regulations on the emission of vehicular exhaust in Pakistan are very lax and lenient. As a traveller in the country I often notice that cars, buses, rickshaws releasing exhasut fumes do so “without fear” on the roads. I’m allergic to the gas produced by vehicles so it becomes really hard for me to travel with open windows while I’m in a car and hundreds of other people face the same problems. These emissions are also the reason for an increase in temperatures. Urban factories also release their uncontrolled smoke into the air while, as a further point, the concept of afforestation is hardly applied as a remedy to areas suffering from environmental damage.

The problem here is the non-implementation of the standards of the Kyoto Protocol and the lack of policies to ensure a safe environment and safe earth. Such wilfully negligent behaviour is the result of the same market-based mechanisms at work in Pakistan as were seen in the Gulf of Mexico. If the American government had intervened and hadn’t allowed the British oil company to dig deep without proper safety measures, and if the government of Pakistan does intervene to ensure the implementation of the checks and balances of  the Kyoto Protocol, the environment can be saved and with it life on earth.

Pakistan needs to put in place adequate afforestation and forestation policies and ensure their proper implementation. It should come up with a 10-15 year forestation plan which will function as a sustainable solution to take care of the earth and the earth’s waters. We should build dams as well in order to contain the water and avoid floods – natural disasters. Pakistan should also ensure carbon credit purchase by industries which release carbon dioxide into the environment as prescribed in the Kyoto Protocol, as well as regulate vehicle exhaust emissions to ease the strain on the environment. I believe that policies need to be evolved that are also certain to be implemented –  only then will we be able to protect our EARTH.