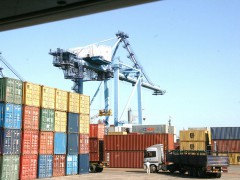 My economics teacher at university liked to quote the maxim: “trade makes everyone better off”. He believed that if people engaged in trade they become more prosperous.

This is even truer when applied to countries. Bilateral and multilateral trade creates market and job opportunities for citizens of participating countries. For example, it is envisaged that the Transatlantic Trade and Investment Partnership (TTIP) will “drive growth and create jobs” in the USA and European Union. The benefits from TTIP that should spill over to the rest of the world have been estimated at Euro 100 billion.

Similarly, over the years Uganda’s president Yoweri Museveni has been urging East African countries “to strive for market-driven integration to enable the region to gain mutual benefit from trade with other regions”. Museveni argues that a bigger East Africa market is more competitive and advantageous than individual states. “An investor is more enthusiastic when he/she hears of a market of 133 million East Africans rather than a market of just 35 million Ugandans,” he said.

The East African Community (EAC) is a regional intergovernmental organisation comprising of Burundi, Kenya, Rwanda, Tanzania, and Uganda, with its headquarters in Arusha, Tanzania. The vision of this regional bloc is a prosperous, competitive, secure, stable and politically united East Africa. It also aims to “widen the region’s economic integration in order to improve the quality of life of the people of East Africa through increased competitiveness, value added production, trade and investments.”

With a combined population of more than 133 million people, a land area of 1.82 million square kilometres and a joint gross domestic product (GDP) of $74.5 billion, the EAC holds great strategic economic significance and potential as it trades with the rest of the Africa and the world. If entrepreneurs tap into this market they can turn around the community. Key among the trade arrangements EAC member states have ratified is the Common Market which allows “free movement of goods; labour; services; and capital, which will significantly boost trade and investments with the objective of making the region more productive and prosperous”.

In this market of unrestricted movement of labour, capital and services inefficient firms will lose their market share and may close shop. However, efficient firms can benefit from economies of scale, increased competitiveness and lower costs, as well as higher profits. It is hoped that such efficiency will break the monopoly of multinational corporations in the region.

Consumers were promised cheaper products, more efficient providers of products and increased choice of products. However, non-tariff barriers are still blocking the flow of free business in the regional bloc. It is hoped that EAC integration will propel member states into a middle income status in the next decade if the Customs Union and the Common Market Protocol are fully implemented now.

But at the same time, there are fears that the more hardworking and smarter East Africans from Kenya may dominate the trade and business opportunities all over the region. In terms of business opportunities there are concerns that other East Africans are losing out to Kenyans. For example, a number of surveys have shown that Kenyan banks are dominating the region, and Kenyan nationals are also said to have dominated the securities markets in the EAC. This is making other members jittery. Nor are matters helped by the fact that Kenya is East Africa’s key economic power.

In addition, there are political overtones that the integration of East Africa is being rushed. Tanzania – which is perceived by Uganda and Kenya as a “slow walker” on the road to EAC integration – is somehow feeling sidelined and has threatened to pull out of the arrangement. Recently Tanzania’s president Jakaya Kikwete warned that he would not hesitate to walk out of the EAC if Rwanda, Uganda and Kenya keep by-passing him when deciding key issues affecting integration.

On the other hand, there is debate about whether South Sudan should be admitted into the East African Community since it is already a key trade partner in the region. The salient issue here is that Uganda and Kenya will soon join South Sudan in pumping internationally sought oil. Production of oil could change the future of the EAC for better or for worse depending on how the resource is managed. Already international oil companies from Europe (Tullow Oil plc and Total), China (CNOOC) and the USA are actively involved in the region’s oil exploration and production venture.

Thus globalisation could leave some people benefiting at the expense of others. People’s expectations in international trade should be well managed to avoid disappointment; otherwise, contrary to what my teacher used to say, trade may not make everyone more prosperous.