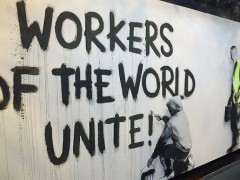 Banksy @ Bristol City Museum Picture published by fingertrouble on Flickr under a CC BY 2.0 license

Being young often means being unemployed or working in the wrong job. More and more young people cannot find suitable work after leaving university. I’ve read a lot about youth unemployment in Western Europe and the States, but I haven’t heard much about young people out of work in Eastern Europe.

When I arrived in Moscow in August 2008, I was fresh, eager and just out of university. And I found a job within a week. All I needed to do was put my CV online and wait for the calls from recruitment agencies to pour in. At the end of an exhausting week of interviews, I was able to choose the job I wanted. But things have changed since the crisis: it’s no longer ‘easy’ to find a job in times of economic downturn.

The level of unemployment in Russia remains incredibly low compared to Europe. 2012 was marked by an unemployment rate of 5.2%. Russia’s economy isn’t doing too badly when compared to Spain’s, let’s say, but this doesn’t mean that it’s doing great, and that all young people can find  fulfilling work.

Official statistics on youth unemployment are rather controversial [ru]; some sources claim it’s growing, others say the opposite. The problem is that not too many people are registered with the Employment Services and a lot of people work “on the side”. According to the staistical agency Rosstat, only 14.9% of the population aged 15-24 is unemployed, 29.1% of whom have been looking for work for a year or more.

The reasons for youth unemployment in Russia are different from those in Western Europe. Unlike in the rest of Europe, people retire earlier, which means that  young people have more chances of getting a job. Ironically, the low level of male life expectancy is a further factor that prevents unemployment as well.

In my opinion, the main causes of the disproportionatly high rate of youth unemployment are:

First of all, a lot of young people graduate with useless degrees that have low appeal for the market. So they are forced to make compromises and accept any job they can get. Just like in the European Union, young professionals in Russia are overqualified for the jobs they do get. Secondly, young people in Russia have an incredibly high level of education: almost 90% of high school graduates go [ru] to university at a time when the economy cannot absorb this amount of skilled labor.

Youth unemployment has also highlighted the crisis in education in Russia where universities are unable to prepare skilled professionals for the economic sectors most highly sought after. The IT field is crying out for skilled labor, yet a lot of young people prefer to study law or economics.

The brain drain is another endemic problem that impacts painfully on the Russian labor market. The most skilled and highly educated young people prefer to move abroad to study and never come back. About 500,000 young people left [ru] Russia between 2003 and 2007; their main destinations were the USA, Germany and Israel. Russian official statistics quote a lower figure; however, its figures are often inaccurate. Those who leave are either against Putin’s regime or simply do not feel appreciated at home.

Several years ago, Western Europe was seen as one of the most attractive places to start a career by young professionals from Eastern Europe and Russia. A degree from a Western university meant the promise of employment for millions of young people. If there were no jobs back home, a young professional could always go to, let’s say, Germany. Yet this scenario has changed over the past few years as young people from the West also cannot get jobs at home – which means there are no jobs for foreigners either.

A lot of people in the West end up changing jobs every year, working crazy hours in their unpaid internships and borrowing money from their parents. Young people spend a lot of time sending out covering letters and CVs hoping to be invited for an interview. Getting a job in Moscow is easier than getting a job in Berlin, yet a lot of people prefer waitressing in Europe to working in Russia.

There is no easy solution for such a situation. The only things I’m certain about are that young people should not be exploited, that their work should be paid, and that unpaid internships should be eliminated. Unless the government takes a stand, nothing will change. After all, young people are the future of Europe.