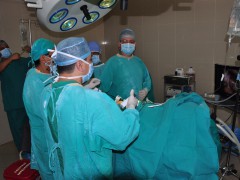 In Ecuador health is a matter of public services (with five hospitals managed by the Health Ministry in the three biggest cities and dozens of health sub-centers in the rest of the country) and private enterprise (with over 40 hospitals and clinics, that, in most cases, work with private health insurance). But health is also a constitutional right. At least this is true on paper, as you can read in Article 32, section seven, of the Constitution: “Health is a right guaranteed by the State (…).” But if we put it in context, you can say that there is no such thing as perfect healthcare in Ecuador, especially in the public area. We still have delays in medical attention, various crises raging, complaints about treatment, and up to two months waiting for appointments with certain specialists.

That’s all pretty commonplace in Ecuador. What’s more, as a note in the newspaper El Universo shows, based on data from the Fiscal Policy Observatory (OPF) published in late 2012, the actual reality looks worse: “The number of beds available in the system (including public and private entities) was 24,545 in 2011, indicating a rate of 1.7 beds per thousand inhabitants. While the World Health Organization recommends that there should be between 8 and 10 beds per thousand people (…) investment in the health sector must increase each year by a minimum of 0.5% of GDP up to 4% as stipulated in the twenty-second transitional provision of the Constitution. But the $ 1,700 million investment this year, representing 2% of GDP, is still far under the 3.4% investment that would be needed to be in compliance with the Constitution.”

Ramiro González, director of the board of the Ecuadorian Social Security Institute on a visit to El Oro province, on September 29, 2011. Photo by Gobierno Municipal de Piñas on Flickr.com. CC BY-SA 2.0

But there is a widespread idea that if you are the member of the Social Security Institute in Ecuador (IESS) you’ll do better on the health front. IESS is the country’s agency responsible for providing health and social services to its members. You can say that right now every Ecuadorian family has someone who has had surgery or emergency treatment paid for by the IESS, in one of its hospitals across the country (approximately one hundred) or in one of the private hospitals with which IESS has signed agreements for its members.

However, health also has an indisputable relation to politics: Ramiro González, director of the board of IESS is the ‘public face’ on a series of TV commercials that instrumentalise successful IESS initiatives as part of a political campaign. The political movement he leads, AVANZA (“Go”, in English), will be part of the forthcoming general election on February 17th. As a public figure, Ramiro González is trying to strengthen his political group by using the image of the Ecuadorian Social Security Institution and its “progress” in the medical care area.

Yes, in the TV spots, González talks about the benefits of IESS and how his AVANZA team will legislate and improve health benefits if it reaches the Assembly. Moreover, on his visits to various cities he never fails to address this issue which has become a strong part of his campaign. A few days ago, during his visit to Latacunga, González talked about what has been done and what is expected in the hospitals area. According to the newspaper La Gaceta: “Ramiro González said the institution has provided important equipment to the IESS hospital in Latacunga including state of the art ambulances, and he also mentioned that the IESS is equipping the three central hospitals with the aim of transforming them into first class healthcare centers. Nor does he rule out that this year the intensive care unit at Latacunga hospital will open with a capacity of six beds and an investment of $ 600,000.”

It is time to take advantage of election promises. González asked for a 30 days leave of absence from his IESS office which was granted on January 10th and which will give him time to participate in the campaign that officially ends on February 14th. Right now he’s travelling around the country  in support of his movement. AVANZA only presented candidates for the National Assembly and the Andean Parliament. They didn’t present any candidate for the presidency. González is now only intent on strengthening AVANZA with future  elections in mind, not the current one. In billboards you can see him saying: “We are with you, Mister President.”

For many it’s strange to know that Ramiro González is not running for any office (it’s even stranger that he was granted a leave of absence in this context). Why is he doing that? Because he is a politician (a few years ago he was even a candidate for the vice-presidency!) and he wants to build his own party. When he asked for his leave of absence, just four months after AVANZA was credited as one of the twelve national parties and movements with permission to participate in elections, he was very clear: “In these days we’ve had a tough job touring the provinces of Cotopaxi, Tungurahua, Chimborazo, Manabi, Guayas and Los Rios. But as president of AVANZA I’m very happy.”

And just like that, health becomes a hot issue on the electoral agenda in Ecuador. As usual.