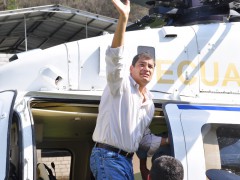 Last April Ecuador’s president Rafael Correa went on an international tour of several countries, including Germany, Italy and Spain. In Germany, his intention to open a trading space with the European Union (EU) became clear to many people. In a joint press conference with German chancellor Angela Merkel, he said as much and made some important declarations:

1. The objective of his trip was “to introduce Ecuador as a country of big opportunities for investors.”

2. Ecuador has “great dynamics” and is “the fastest growing economy” in the region.

3. It’s now only a matter of giving “the definitive political impulse,” to gain approval from both sides (Ecuador and EU.)

These declarations took the country by surprise – especially because during his time in office Rafael Correa has never lost an opportunity to say that signing any free trade agreement would be madness. So the question these days is whether Ecuador is looking for a free trade agreement or a commercial agreement with the European Union.

Ecuador has a history of not welcoming free trade agreements. Almost ten years ago, before Correa’s term, Ecuador’s citizens reacted with protests, screams of indignation and graffiti to reject any possibility of the country signing any agreement of the sort with the United States. The reason? The popular belief that the country couldn’t compete with production from the USA and that the Ecuadorian enterprise would be lost in a David versus Goliath battle.

At present, the core drama is to explain exactly what kind of agreement Correa has in mind. In dozens of national press articles we can find headlines that talk about a free trade agreement with the European Union. There have even been “open letters” from social groups expressing their discontent about the possible signing of such an agreement and asking the president to give “precise information on the matter.” The El Telégrafo broadsheet titles an article (of 24 April) “Ecuador is heading towards a commercial agreement with the EU, not towards a free trade deal.” The text validates the president’s intentions: “On the subject, the head of state specified that the country needs investment not of a random kind but the sort that will contribute to improve the conditions in which Ecuadorians live.”

Correa, who identifies himself with a left reformist tendency, has invested in social issues as no other president before him has done, and has increased the size and power of the state as part of a government program that has survived on oil and tax incomes alone. But that’s not all. Ecuador has turned to loans and commercial agreements with countries such as China. Now the aim is the construction of hydroelectric plants and encouraging exploitation of the country’s copper and gold deposits. But the government is also focusing on securing rights for oil exploitation in the southeastern part of our Amazonia –a protected zone but also the biggest oil reserves of the country. However, such a move would not lead to immediate profitability. That’s why we would be facing a shift of direction. Ecuador needs money.

Manuel Chiriboga, former chief negotiator of the free trade agreement between Ecuador and the United States, analyzed the situation in an interview with El Comercio, a local newspaper. In his view we are facing a new version of the state with a particular slant towards : “A model where the state conducts the economy using agreements with private sectors.” For Chiriboga, the commercial cooperation model between countries is no longer viable: “A developmentalism model is impossible with China because that country is interested in getting raw materials for its own industrialization.”

And so, the visit to Germany clearly “reveals a point of inflection: to settle on the agreement with the European Union. That would open the negotiation field with other countries, such as Turkey – a key country for our banana exports – with China, Russia, and perhaps, with the United States,” as Chiriboga concludes.

In a piece published in El Universo another local newspaper, the economics expert Walter Spurrier ponders why we are at this stage: “(…) the strategy that was so useful in the last six years no longer produces results. This year there will be no increase in income from oil over last year. There won’t be a way to increase public investment. Part of the money that used to be invested in public works will have to go on much needed maintenance. On 2013 there will be an economic slowdown that will continue through 2014 and 2015. But this is not a prediction, not a curse; it’s inevitable. It’s what will happen if the government is not inventive in its economic policy. The regime, conscious of what will come, must have a contingency plan ready at hand.”

So maybe it’s time to get creative in Ecuador, even if it means that social movements, linked to the left wing, do not like the idea at all, and protest about it.