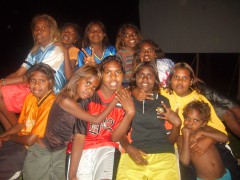 The Australian education discourse is a largely urban one. Families in the capital cities have an abundance of schooling options to choose from, with the major consideration being the merits of public vs. private education. The biggest gap in Australia’s education system, where the ‘right to a good education’ is hardest to deliver and least realised, is in Australia’s remote indigenous communities.

Ali Curung, one of the Northern Territory's 'Growth Towns', with increased funding in education

The figures associated with indigenous students, right across the nation, are shameful, whether in urban, rural or remote communities. A recent review of Koorie Pathways, a Victorian state government program, found that, despite massive spending and targeting of indigenous students, the program failed in its main goal of reconnecting those students with mainstream education.

Remote communities in particular, are tarnished by dismal attendance rates, poor exam results, limited access to resources, high drop out and low retention and graduation rates, and inferior teacher quality. The need for innovative ideas and approaches to tackle the gap in, specifically remote, indigenous communities cannot be understated.

Australian education is, by world standards, excellent. Secondary education results earned 6th place in a 2010 OECD study, while Australian universities have recently placed 8th, in a Universitas 21 report. Furthermore, overseas students are one of Australia’s largest earners; in 2010 – 11 they contributed $16.3 billion to the economy, making it the countries largest services export industry. With such well performing and highly regarded educational institutions, private sector involvement in education seldom features in the mainstream discourse. However, with the continued failure of government interventions in indigenous education, there is perhaps nowhere else in the Australian education system that government and or civil society would be so willing to accept private sector involvement.

Accept it Australia has, and the results have thus far been impressive. The Australian Indigenous Education Foundation (AIEF) offers scholarships to indigenous students in the states of New South Wales, Queensland and Western Australia. In 2011, the AIEF sponsored 209 secondary and tertiary students, with 71% from rural or remote communities. What has been more pleasing than the numbers the AIEF have reached and the money raised, has been the results, with retention and graduation rates well above the national average, 85% compared to 47%.

The Gumala Mirnuwarni Education Project (GMEP) began in Western Australia in 1997 by Hamersley Iron, a subsidiary of mining giant Rio Tinto, in partnership with the Polly Farmer Foundation. Once again, the retention and graduation rates have exceeded the national averages and most students have gone on to apprenticeships, traineeships and employment. Following the completion of the pilot project in 2000 the GMEP has spread to Northern Territory, South Australia and New South Wales.

Both AIEF and GMEP show that, with the right combination of government legislation and business capital, private sector involvement in education can work – and it is not necessarily limited to the developing world.